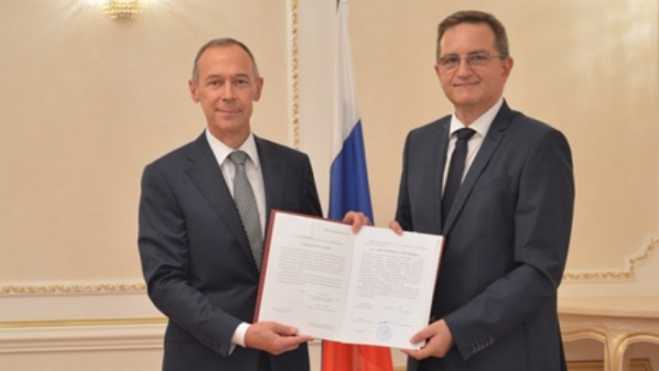 The Russian consulate in Alexandroupolis, northern Greece, is reopening after more than 100 years, the Russian embassy said in a Monday statement.

On September 20, Russian Ambassador to Greece Andrey Maslov presented the consular diploma of the Russian Foreign Ministry and the Greek Foreign Affairs Ministry's executive document to Konstantinos Palakidis, who assumed his duties as Honorary Consul of the Russian Federation on September 5, with headquarters in Alexandroupolis and jurisdiction in the Region of East Macedonia-Thrace.

According to the consular protocol of the Russian Federation, the responsibilities of the honorary consul include ensuring the protection of the rights and interests of Russian citizens, be they visitors or permanent residents within the consulate's jurisdiction.

According to the Russian embassy, Palakidis is the managing director and co-owner of Thraki Palace SA, which owns the five-star hotel complex and conference center Ramada Plaza Thraki in Alexandroupolis.

Palakidis is reportedly a prestigious businessman, known for his philanthropic activity and for his support in developing mutually beneficial relations between Greece and Russia. He is also known for his contribution to perpetuating the historical presence of Russians in Alexandroupolis and East Macedonia-Thrace.

There are currently five honorary Russian consulates operating in Greece: on Crete (serving the Dodecanese also), on Corfu (serving all Ionian Islands), and at Patras, Lamia and Nafplio.

2019 marks 210 years since the establishment of the Russian Consular Service.