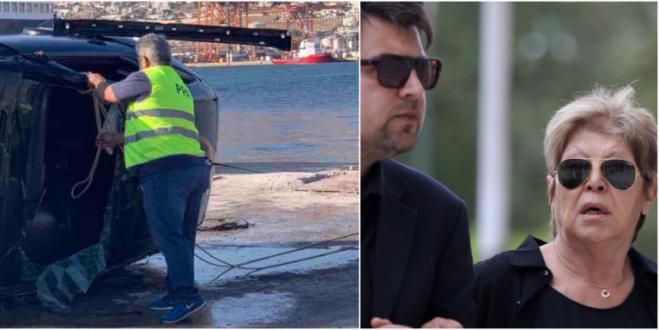 Coast Guard personnel at noon, yesterday, salvaged an automobile from a depth of 32 meters deep, pulling the bodies of a mother with her son, out of the car.

The victims were identified as Sofia Mavrikos, 75, and Theodoros Mavrikos, 53.

According to Greek police ELAS, the victims were the mother and brother of journalist Panagiotis Mavrikos, the publisher of the Acropolis newspaper, who in 2016 had a tragic death in the Porsche Kayenne he was driving and had caught fire while in motion on the Attica highway. The 42-year-old publisher, Panagiotis Mavrikos, had been working with Justice on the blackmailing ring case.

In 2016, P. Maurikos' car hit the Attica highway  barrier and was consumed in flames, with the journalist being charred

The Mercedes-Benz car found on the bottom of Drapetsona, in which the mother and brother of the journalist were killed, belonged to the publisher's wife P. Mavrikos.

Two dogs were also in the car, one of which was rescued by swimming

Attorney Kougias: They had serious psychological problems
As Panayiotis Mavrikos' lawyer, Alexis Kougias, told reporters, he was unofficially informed that they were relatives of the deceased journalist. The lawyer argued that they both had serious health and financial problems. In fact, he said that they had recently left their home in Varkiza because the banks took it, and had moved to Drapetsona.

Reportedly, a large amount of psychotropic drugs were found in the car and authorities are considering whether Mavrikos' mother might have deliberately crashed it into the sea..