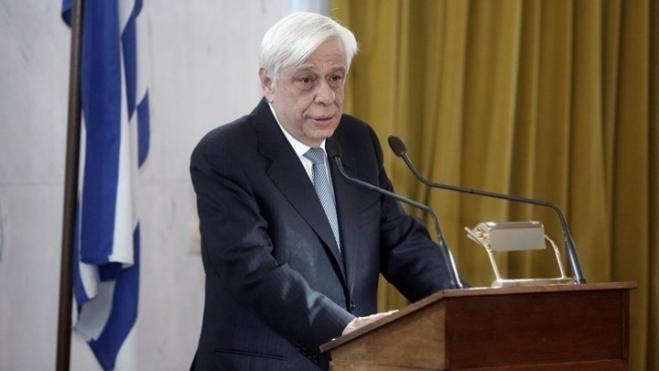 Neither hesitation nor negligence are permissible when it comes to defending peace and democracy by defending the implementation of international law and European legality, President of the Hellenic Republic Prokopios Pavlopoulos said on Sunday in the coastal town of Nafpaktos.

The president had just been proclaimed an honorary citizen of the Nafpaktia municipality in a ceremony marking the anniversary of the historic naval battle of Nafpaktos.

In a message to neighbouring Turkey, Pavlopoulos underlined that the European Union will not tolerate Ankara's arbitrary actions and the violations of international law - such as its military operations in in Syria - which undermine peace and stability in the strife-torn Middle East. Especially when these actions pose a threat to the EU's borders and territories, as delineated by the territory and borders of Greece and Cyprus, he added.

He also noted that the Greeks "when and however times this is required, will impose the full and sincere respect of international and European law in its entirety, and do so with the support of our Allies in NATO and our partners in the EU. We will also do this on terms of unbroken unity, as we have shown every time we defended our national issues and our national rights."

Addressing the major powers, the president said that critical, international situations - such as that occurring at the present time - destroy democracy and marginalise people and fundamental human rights.

The EU, especially - due to its global role for the defence of the principles and values of peace, democracy, justice and human rights - must be prepared to intervene at all times, promptly and efficiently, in order to ensure full respect of international and European law, he added.

The president said the current situation, which led to a fundamental pillar of Europe - its common foreign affairs and security policy - remaining inactive at a time when it should be demonstrating its true potential, was unacceptable for history, the future and the prospects of the EU.

He warned that Turkey's "quaint" but also dangerous "imperial fantasies" will meet the appropriate response and also that they undermine any prospect of favourable developments in Turkey's path to EU accession and its relations with the West, in general.