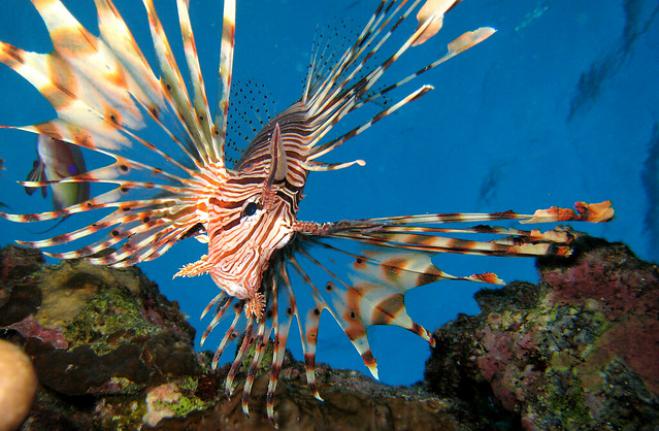 Greek scientists have launched an attempt to record the numbers of alien species of fish from the Red Sea that have "invaded" the Aegean, especially in the north, and to assess their impact on the environment - as well as on humans, given that some are toxic and dangerous.

Ichthyologist Sotiris Kyparissis of the Fisheries Research Institute (FRI) informed the Athens-Macedonian News Agency (ANA) that more than 280 alien species from the Red Sea have appeared in the Mediterranean, due to a widening of the Suez Canal, warmer seas and other factors.

One of the most dangerous to reach the Aegean is Lagocephalus sceleratus, or toadfish, whose body contains a deadly neurotoxin that can kill, as well as species of poisonous stonefish or the spiny Lionfish, whose spines contain a protein-based toxin destroyed by cooking. This means that, unlike toadfish, lionfish can be eaten by humans.

Scientists are trying to track the changes these new species have made on marine ecosystems, Kyparissis said, while his own area of study in the north Aegean, where the waters are colder, focuses on whether this remains a barrier to their spread.

"If we see large quantities of alien species from the Red Sea in the north Aegean, then we will consider that something has changed...that this barrier has fallen," he said.

The group is also preparing a guide for the public to these alien fish species, with photographs and detailed descriptions, so that people involved with fishing will be able to recognise them. They are also encouraging the public and both amateur and professional fishers to report sightings to FRI.