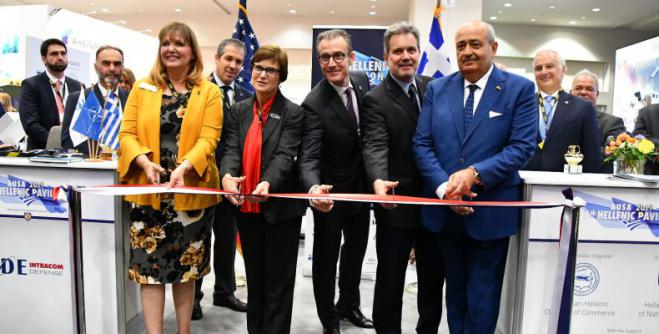 For the sixth consecutive year, Greece participates with the National Pavilion in the largest, exclusively for the Army, 2019 International AUSA Defense Exhibition, held in Washington from October 14-16.

The National Pavilion is co-organized by the Hellenic-American Chamber of Commerce and Enterprise Greece and is under the auspices of the Ministry of Defense / Directorate General for Defense Equipment and Investments (GDAE).

The opening of the stand was made by the Director General of GDAE ret. Admiral Kyriakos Kyriakidis, the Greek Ambassador to Washington Mr. C. Lalakos, the President of the Hellenic American Chamber of Commerce Mr. Nikolos Bakatselos, and on the part of the US Army's Department of Defense Cooperation (DASA DE&C) AUSA Vice President. Patricia McQuistion.

Representatives of delegations from other countries and companies participating in the Fair also attended the ceremony. The AUSA 2019 covers an area of ​​16,000 sq.m. and hosts more than 700 exhibitors from 80 different countries are participating. The exhibition is expected to attract over 30,000 visitors.