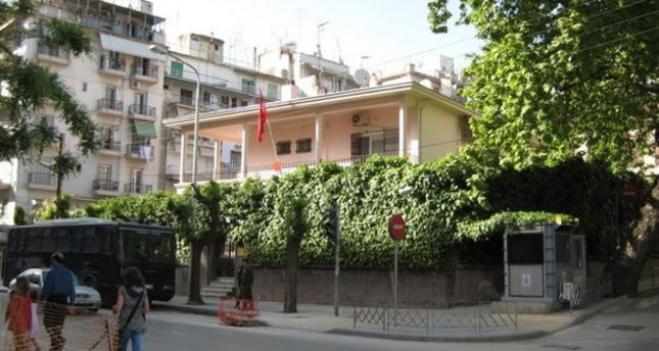 A case file was opened against 12 individuals detained for illegal entry in the courtyard of the Turkish consulate general in Thessaloniki on Thursday, to protest Turkey's attacks on Syria.

The consulate complex contains the house where Turkish leader Mustafa Kemal Ataturk was born and which now serves as a museum.

Members of the self-styled "Anarchist Federation" were booked for "disturbing home peace" and "exposure to the threat of retaliation", both misdemeanors. According to an Internet posting on social media, the protest was "an intervention of solidarity to struggling Rojava by the Liberating Initiative of Thessaloniki and the anarchist collective Rouvikonas."

They will be led before a prosecutor on Friday.

The act prompted the reaction of the Greek foreign ministry, which condemned the act as "unacceptable and irresponsible."

"We unequivocally condemn the illegal entry of members of an anti-establishment group into the courtyard of the Turkish Consulate General in Thessaloniki, where the Ataturk House is located," the statement said. "This was an unacceptable and irresponsible act. The competent Greek authorities, who reacted immediately, have already detained suspects and are taking necessary action to investigate the incident and bring those responsible to justice," it added.

Meanwhile, police also detained an unknown number of people who protested at the Thessaloniki International Airport "Makedonia" by unfurling a banner at the Turkish Airlines check-in counter and shouted slogans against the military interventions in Syria.