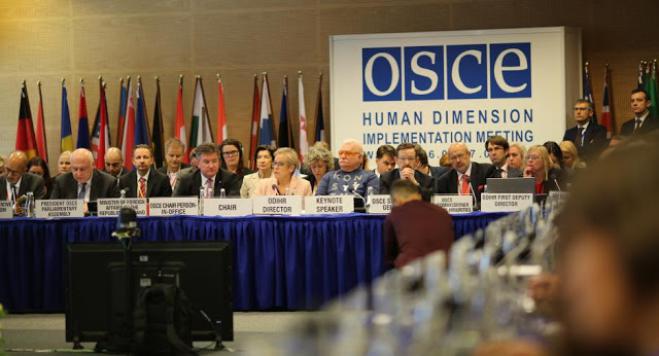 The annual meeting of the Office for Democratic Institutions and Human Rights (ODHIR), which is part of the Organization for Security and Cooperation in Europe (OSCE), took place from 16 to 27 of September, 2019 in Warsaw, Poland.

On Tuesday, September 17, the “Movement for the Renaissance of Northern Epirus” participated in the 3rd Working Session on “Democratic institutions, democracy at national, regional and local levels and democratic elections”.

In his speech, the Movement’s president Dimitris Perdikis condemned the Albanian government’s arbitrariness in the June 30, 2019 municipal elections, which in most municipalities were held by only one candidate, the one supported by the governing party.

Mr. Perdikis stressed that neither the President of the Republic of Albania Ilir Meta nor the opposition recognized the electoral process or the results, but Edi Rama’s government acted on methods that lead to the establishment of a one-party regime. He also cited the OSCE report, which stated that only 15% of the electorate cast ballots for the election of local authorities, citing a very low turnout, which did not legitimize the results.

Mr. Perdikis made a special reference to the elections in the Municipality of Himara, where there was a clear violation of the human rights of the Ethnic Greek Minority with the rejection of the candidacy of Freddy Belleris for Mayor. At the same time, he raised issues such as the non-quantitative representation of Hellenism in the Albanian Parliament, the electoral law that does not provide for the direct participation of representatives of minority parties in the electoral committees, but only through forced alliances.

During Mr. Perdiki’s speech, the Albanian representative lodged a complaint, saying “questions are being answered once again” and that her country “respects the rights of minorities”. However, the coordinator of the working session rejected the objection by replying that this position could be expressed at the time provided for the countries’ representatives to reply.

At the end, the Albanian representative argued that her country had enshrined the rights of national minorities through the passage of the “Minorities Act” adopted in October 2017, which, however, is not implemented yet, a detail she forgot to mention…

Full text of the “Movement for the Renaissance of Northern Epirus” for the 3rd Working Session on the OSCE website.

On Thursday, September 19th, the “Movement for the Renaissance of Northern Epirus” took part in the 6th Workshop on “Fundamental Freedoms – The Right to Meet and Associate”.

The President of the Movement, Mr. Dimitris Perdikis, explained in his speech how for the last at least five years, the Albanian state has used various methods to engage in psychological terrorism against members of the Ethnic Greek Minority who are working for the human rights of their community. Usually these people are detained by the Albanian police for hours on the Greek border – Albanians, without giving them the necessary explanations, blocking their passage.

He noted that especially in the last year, following the murder of Konstantinos Katsifas, a Greek from minority village of Vouliarates on October 28, 2018, these phenomena have multiplied. On December 8, 2018 people, even individuals who are also Albanian citizens, were stopped from entering Albania, in order not to attend the 40-day memorial service of Konstantinos Katsifas. Members of the Greek minority were unjustly and without any explanation detained for hours by the Albanian police in order not to go to the memory of their compatriot.

Also in the summer of 2019, Albanian police banned entry into Albania to Greek citizens who are married to women from the Ethnic Greek Minority of Albania, without explanations.

In the village of Krania, twice in December 2018 and once in July 2019, Albanian nationalists destroyed the Monument to Thymios Lolis, a hero of the Greeks of Northern Epirus, where events regarding the Greek National Minority’s human rights usually take place. The Albanian authorities made no arrests, sending the message of tolerance to actions against the peaceful expression of the Greek of Albania.

The speech of Mr. Perdikis was interrupted twice by the Albanian representative. However, the working session coordinator rejected the Albanian objections.

It is worth noting the position of the Canadian representative, who requested that state delegations should not interrupt the speeches of civil societies’ representatives.

The fourth and final speech at the “OSCE Human Dimension Implementation Meeting 2019” in Warsaw was made by the “Movement for the Renaissance of the Northern Epirus” at Working Session 12 on “Rights of Persons belonging to National Minorities”, which took place on Tuesday 24 September.

The Movement’s President Dimitris Perdikis summarized the problems the Ethnic Greek Minority of Northern Epirus at the south of Albania face from the Albanian state, such as property deprivation, population alteration, racist and xenophobic propaganda against the Greeks and the Greek Minority.

Mr. Perdikis emphasized that the indigenous Greek National Minority needs institutional protection from international organizations in order to continue to survive in its place.

The Albanian representative responded with general not-to-the-point statements of “respect for national minorities”, citing a passage of the “Minorities Act” of 2017, but which has never been implemented…

Read here the full text of the intervention of the “Movement for the Renaissance of the Northern Epirus” in the OSCE Summit.