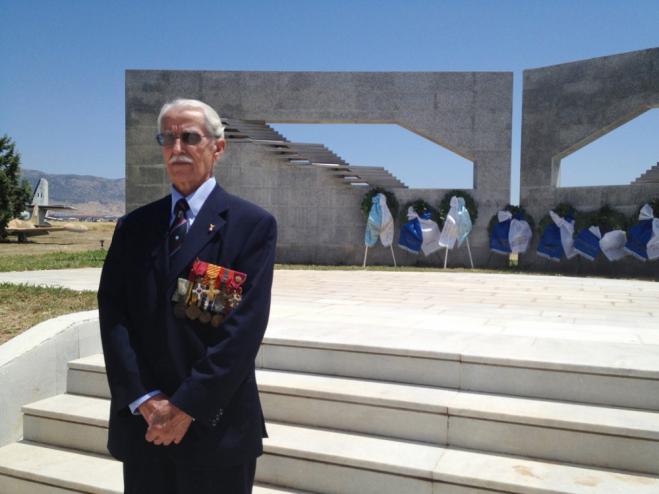 One of the last of his generation, Chatzilakos happened to become part of history unawares as one of the pilots who in November 1943 provided air protection to missions taking British Prime Minister Winston Churchill and US President Franklin D. Roosevelt to meet with USSR leader Joseph Stalin at the Tehran Conference. Remembering his fallen colleagues, the experienced former fighter pilot spoke of his combat missions - over 200 - and the reality of a war "in which four of us would take off and two, or one - or sometimes none - would return." Joining the war soon after he finished training and fighting for Greece was "a journey full of stress, pain and blood," Chatzilakos says, but his message to today's generation of pilots is "to keep a sense of duty and honour in their hearts and do what it dictates to them."
The interview follows:

ANA: Mr Chatzilakos, you are an iconic figure of the Hellenic Air Force. As a fighter pilot during World War II on 'Hurricane' and 'Spitfire' aircraft, you carried out over 200 missions in the theaters of war in North Africa, the Mediterranean, Italy, Yugoslavia and the Aegean Sea. Tell us how it all began.
CCh: For us new Hellenic Air Force Flight Academy graduates, everything began with the "Ochi" (No) that Greece said to Italy's ultimatum in 1940, and we continued, to fulfil a vow and an obligation. It was a journey full of stress, pain and blood: "Come back either with your shield or on it" (a Spartan exhortation). This is what happened.

ANA: When the front collapsed in April 1941 and Germans entered Greece, you and your 39 classmates from the 10th series of the Flight Academy were transferred from Argos - the intermediate base of your flight school - to Crete, which was resisting the invasion, and then on to Egypt, Rhodesia, and Sudan, where you completed your training as fighter pilot, before joining the Greek squadrons of the Middle East under the British Royal Air Force. How would you describe that time, shortly before you entered the battle fronts of WWII as a fighter pilot?
CCh: We entered the Flight Academy in the summer of 1940, we were therefore aware of what was coming. Our path from Tatoi, to Argos, Crete, Palestine, Egypt, Rhodesia and Sudan, where we completed our flight training, was merely the path to fulfil our goal, which was to join the active squadrons the soonest possible and pitch ourselves into battle.

ANA: In February 1943, you were appointed to the newly founded 336th Combat Squadron, supplied with Hurricane aircraft. Following this, a tent in the middle of the brutal Libyan desert became your home away from home. You flew off impromptu air fields on the coast of North Africa to the entire Mediterranean to provide air protection mostly to Allied convoys, but also to take part in operations on occupied Crete. What stands out most in your mind about these operations?
CCh: Four of us would take off and two, or one - sometimes none - would return. That's what I remember.

ANA: Is it true that in November 1943 you were on one of the four Hurricanes which took off urgently to provide air cover on a cruiser sailing under top speed toward the port of Alexandria carrying British Prime Minister Winston Churchill? And that two days later, you again escorted an American 'Liberator' bomber carrying US President Franklin Roosevelt to Tehran?
CCh: True, on 22 and 26 November 1943, four Hurricanes from 336th Squadron took off on two classified missions. One was to provide air cover to a cruiser and the other to escort a Liberator bomber with American insignia. Later, when the classified mission was over, we found out what their precious cargo was. It just happened that I took part in both missions.

ANA: As of the end of 1943, the two Greek combat squadrons in North Africa were supplied with Spitfire fighter aircraft. How did these differ compared to the Hurricanes you used to fly up to that point?
CCh: The Hurricane is like a horse pulling the plough - strong, resilient, persistent, stubborn. The Spitfire is like a thoroughbred racer - light, fast, flexible, and above all, beautiful.

ANA: In the autumn of 1944, the Hellenic Air Force withdrew from North Africa and settled in bases in Italy. It was a time when German troops were hurriedly leaving the Balkans, as the war’s focus had moved into their own country. Could you tell us about the missions you completed from the Italian airports and how you felt when you were informed that Athens was liberated on 12 October 1944?
CCh: The 12th of October 1944 was a day of joy for Athenians, but I recall it as the day that my colleague Epaminondas Kottas was killed during a mission in Yugoslavia, at a time when the prime minister of Greece was raising the Greek flag at the Acropolis. You see, the war in Europe continued past 12 October. Following the missions we carried out over the Aegean Sea until the last German garrisons surrendered - when another six of my colleagues were killed - Lefteris Karamalegos and I returned to Italy, where battles continued fiercely, and we joined the British combat squadron to the end of the war in Europe, on 8 May 1945. So on 12 October we rejoiced over the liberation of Athens, but we were still fighting in the war.

ANA: When did you return to liberated Greece, and how many of the original 40 Academy pilots of the 10th series survived?
CCh: We returned to Athens on 14 November 1944. Of the 22 pilots in the 336th Squadron in February 1943, only 7 returned. Of my 40 classmates, only half made it back alive.

ANA: Of all your fellow combatants, who is it you remember most frequently today? Do you know whether any other airmen from the Greek squadrons in the Middle East are alive today?
CCh: You never forget anyone - especially the person you shared your tent with and when you returned from a mission found his camp bed empty. Of my classmates, only one is still alive, Stathis Athanassopoulos.

ANA: If we turned the clock back and you were 23 years old, what fighter aircraft would you want to fly with today?
CCh: The Spitfire, because it is linked to some of the most intense moments of my life as a pilot.

ANA: What message would you like to convey to today's Hellenic Air Force pilots, who defend the Aegean on a daily basis?
CCh: To keep a sense of duty and honour in their hearts and to do what it dictates.

ANA: Mr Chatzilakos, you have fulfilled more than your duty to your country, moreover under very adverse conditions. What would you say our own obligation should be today?
CCh: To not forget, to be respectful, and to be vigilant.

Air Marshal (Ret.) Constantine Chatzilakos was born in Larissa in 1920 and entered the Hellenic Air Force Flight School as a cadet in 1940. During WWII (1940-1945) he flew over 200 combat missions and was awarded with ten military honours. Following the war he was a flight instructor (1945-1967) in all three branches of the Hellenic Armed Forces and held top-level positions at airforce units and at NATO divisions. He also served as military attache at the Greek embassy in Washington (1964-1967), after which he was discharged for not supporting the military junta. Joining the private sector, he was part of the management team at Hellenic Steel for 9 years and a technical consultant for McDonnell Douglas from 1978 to 1997. In 2006 he was registered as inventor of 'Triton', a transformer of wave energy into electricity. He lives in Athens, where he serves as president of the local RAF veterans branch. (VP)