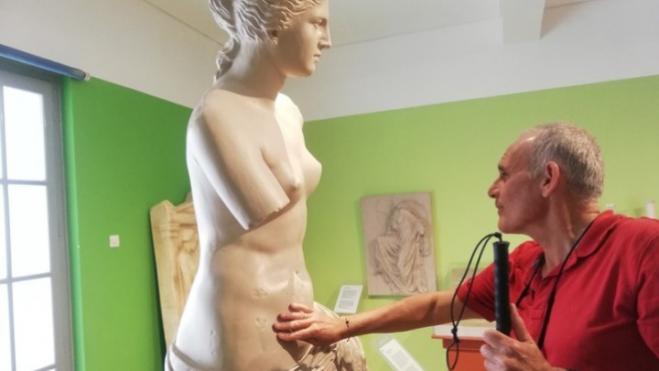 In a listed building at 198 Doiranis Street in the Athens district of Kallithea is a museum that is different from any other. Instead of hiding exhibits in glass cases and keeping visitors a safe distance away, it actively encourages them to handle and feel the items on display, literally inviting them to get "in touch" with the best examples of Greek culture and civilisation through the ages.

The so-called Tactual Museum established by the Lighthouse for the Blind of Greece was created to allow the visually impaired to become acquainted with Greece's cultural heritage using their sense of touch. The exhibits are faithful replicas of original artifacts on display in Greek museums that range from the Cycladic and Minoan eras of prehistory to the Geometric, Archaic, Hellenistic and Roman periods of Greek history.

It is now one of five tactile museums in the world, allowing the non-sighted to become acquainted with masterpieces such as the Venus of Milo, Praxiteles' Hermes, the Charioteer at Delphi and a model of the Athens Acropolis, among others.

For the sighted that visit the museum, it is an opportunity to discover how to develop their sense of touch and to enter the world of the visually impaired for a short while. They can learn about the museum's history and what a visual disability is. They can use a mask to cover their eyes and try to find their way around the museum with a white stick and a companion, trying to understand the artworks by touch rather than sight.

"We see with our minds, not with our eyes. Art offers us pleasure, therefore someone that touches needs pleasure. Through the Tactual Museum the opportunity is given to enjoy and come away with that sense that art gives us in all its forms, the aesthetics, the harmony the peace of the soul," the director of the museum Kalliope Gkika said to the Athens-Macedonian News Agency.

Christos Koromilas, who lost his sight as a result of an auto-immune disease 11 years ago, noted that the experience was a revelation for him as a person who had newly lost his sight. "You understand things that you didn't pay especial attention to before. When you touch them, it's as if you see them," he explained.

The museum also has a Byzantine era section and galleries designed to sensitise the public to the Olympic Games and the Paralympics, as well as a pottery and sculpture workshop for the sight-impaired.

It gets roughly 1,000 visitors a month with free entrance for those with a vision disability and two euros for everyone else. It operates by appointment, at the telephone number 210 9415222, from 9:00 until 14:00.