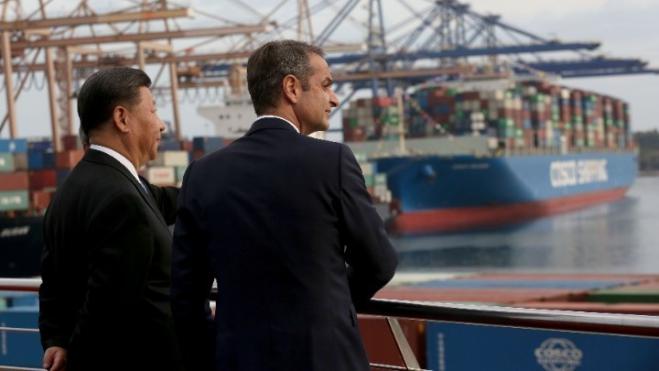 The Greek Prime Minister Kyriakos Mitsotakis and the President of the People's Republic of China, Xi Jinping, toured Cosco's facilities at Neo Ikonio Peramatos in Piraeus, at the Piraeus Container Terminal, on Monday afternoon, accompanied by their spouses Mareva Grabowski-Mitsotaki and Peng Liyuan.

The two statesmen received a warm welcome by workers at Cosco, who were holding Chinese and Greek flags.

Mitsotakis and Xi Jinping attended speeches by both the Minister of Shipping and Island Policy Giannis Plakiotakis and Cosco President Xu Lirong, which both emphasized the merits of a successful collaboration in view of the further upgrading of Piraeus port, and were also shown two high-speed cargo trains by Cosco's president, as they were about to begin their journey towards Europe, carrying dozens of containers.

The two men also spoke with four Greek employees at the Piraeus Port Authority (OLP) about their work there.