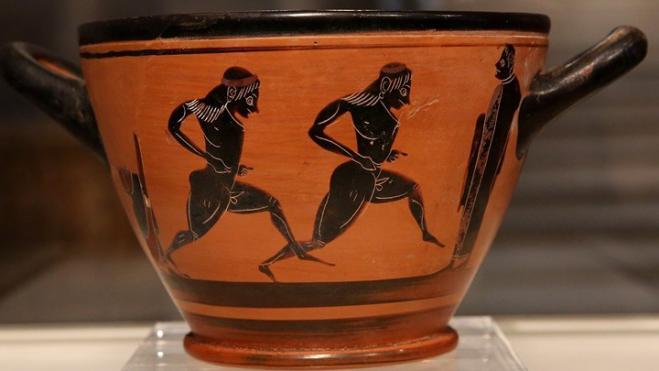 The second of two objects awarded to Spyros Louis, the Greek winner of the first Marathon race held during the first modern revival of the Olympic Games in 1896, was presented to the Greek state by the University of Munster on Wednesday at the National Archaeological Museum, a few days after Sunday's annual race.

Louis, who forever made a name for himself for winning the gruelling 26-mile race from Marathon to Athens, was presented with two awards: a carved silver cup that after an auction belongs to the Stavros Niarchos Foundation, which has put it on permanent display, and an ancient Greek cup depicting runners observed by judges.

The cup will be on display at the Museum until February 2020.The handover ceremony included Culture Minister Lina Mendoni, Museum Director Maria Lagogianni, Hellenic Olympic Committee President Spyridon Kapralos, and University of Munster Dean Johannes Peter Wessels and Archaeological Museum Director Achim Lichtenberger, who returned the skyphos, as the type of vessel is called, to Greece.

The cup was found in a tomb of Thebes dated to the 6th century BC, dated around 540-520 BC. It probably came under ownership of numismatist and collector Ioannis Lambrou at the end of the 19th century and he in turn designated it as an award for Spyros Louis.

In the 1930s, the cup ended up through an unknown route in the hands of Werner Peek (1904-1994), a classical philologist and epigraphist, who was a Nazi and anti-Semite, and who had travelled in Greece on a scholarship. He took the cup away with him illegally in 1934, hidden in the diplomatic boxes of the notorious Nazi officer Herman Goering who had travelled to Greece, as Peek himself later admitted.

Peek kept the cup after the war and in 1980 it came to the collection of the University of Munster's Archaeological Museum.

"There are special moments in the life of a dean, but there is only one moment that leaves a stamp on it, and this is one of them," Dr Wessels said, speaking of the cup's return a few days after the 37th Authentic Athens Marathon race.

Dr Licthenberger spoke of a bittersweet return, "because no director of a museum enjoys giving away an object of its collection. For you it is a matter of national identity, for us a historical object. It was not an easy decision."

"The noble gesture of the University of Munster is a very important gesture of the German people to the Greek people," Minister Mendoni said. "Cultural heritage belongs to the people who created it. In this sense, I express on behalf of the Greek government the gratitude of all of us to you, for making this decision in a context of greatly positive collaboration and collegiate solidarity."