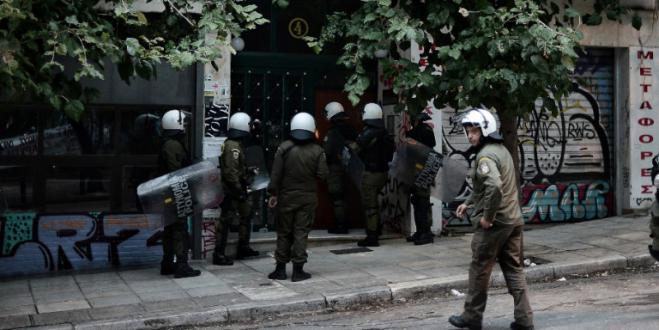 The police plan came to fruition and yesterday's anniversary for the 46th year of the Polytechnic uprising was one of the quietest in the city center, in decades.

Of course, tensions were not entirely absent, as there were isolated incidents around the Exarchia district, but the crowd slowly marched toward the US Embassy, ​​and police intervened promptly where needed.

Polytechnic University: 20,000 protesters, 5,000 police
By early Sunday morning, the center of the capital had become a fortress, with roads closed. According to police, 20,000 protesters took part, of which 8,000 marched in the PAME block, 1,000 in the SYRIZA block, where Alexis Tsipras participated in the first row and about 11,000 in the remaining blocks.

The gates of the Polytechnic closed at noon, while student associations marched to Claithmonos Square in anticipation of the main bulk of the rally for the US Embassy. The PASP block with the blood-stained flag of the Technical University arrived there first.

Limited incidents in Exarchia
The march to the embassy proceeded smoothly, so the police had focused on Exarchia, where they had formed a cordon around the area. There they managed to stop two groups of hooded persons attempting to climb to the rooftops of buildings to obtain concealed ammunition, and during the night there was a low intensity scuffle with the police, which led to the arrest of 33 people and a detainment of 53 in total.