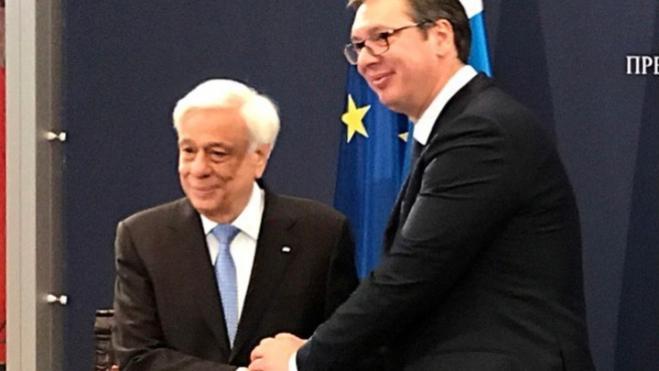 Serbia's President Aleksandar Vucic began an official two-day visit to Athens on Tuesday by laying a wreath at the Monument to the Unknown Soldier. The Serb president was received at the monument by the government's vice-president, Panagiotis Pikrammenos.

The Serb delegation afterward made its way to the presidential mansion, where the Serb president was received by President of the Hellenic Republic Prokopios Pavlopoulos.

In statements to Serb television from Athens earlier on Tuesday, Serbian Foreign Minister Ivica Dacic highlighted the importance of the visit, noting that Greece and Serbia intend to sign a proclamation of strategic partnership relations, in which they will refer to their common positions on various issues and their mutual support on issues that concern each country separately.

Among the matters to be discussed with Greek Prime Minister Kyriakos Mitsotakis, he said, was the formation of a new trilateral regional cooperation partnership between Greece, Serbia and Cyprus.
Dacic is part of a delegation of ministers accompanying the Serb president.