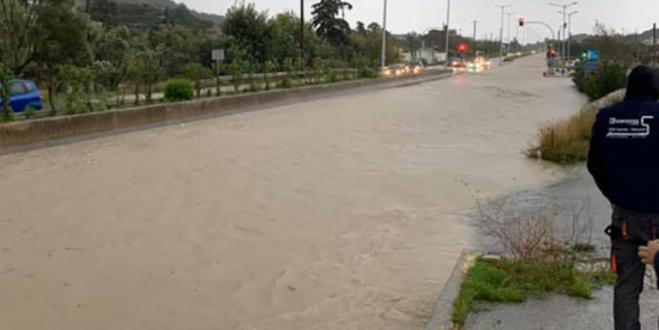 Most of the problems from severe weather front Dido occurred in the Tsairi area, the airport, Faneromeni and other parts of the city.

The bad weather brought rain and hail
The weather is better today but many roads on the island have been flooded. As reported by dimokratiki.gr yesterday morning the heavy rainfall started in Rhodes which lasted for quite some time and there was hail especially in Koskinou area and Faliraki.

The roads turned into eritable rivers
Many problems occurred on main streets, and generally on city streets, which were (literally) converted into rivers.

Rural areas were flooded with bad weather, while traffic problems and landslides were caused by the severe weather

The Fire Department received more than 24 calls for water pumps, 6 calls for rescuing 10 people trapped in vehicles, and two house fires and one call for persons trapped in an elevator.
The volume of water was very large and particular problems in circulation, occurred in Ixia, Faneromeni, Tsiri, Rhodes - Kallithea due to the height of the water in certain places.