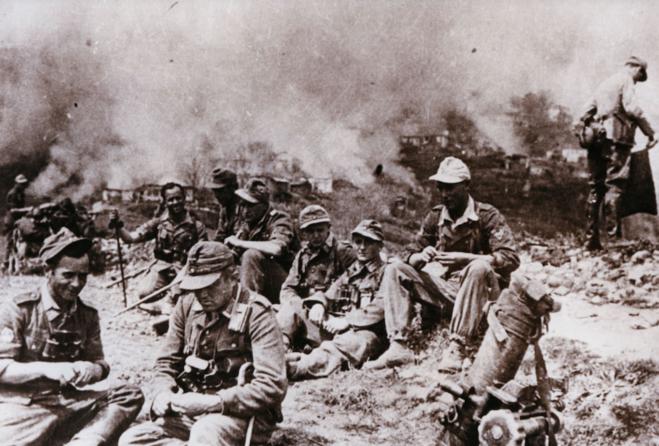 On the early morning of December 13th, 1943, the people of Kalavryta, in the mountains of Achaea, Peloponnese, woke up to the sounds of ringing church bells. The omens were bad. Within hours, at 9.00am, the first German soldiers of the Wehrmacht 117th Jägerdivision appeared in the town’s main road. The orders were definite: Everyone should assemble to the local school. Half an hour later all women and children were locked in the schoolhouse while all men, between 12 and 80 years of age, were lined up and driven to a nearby hillside (Kappi Hill). The infamous “Unternehmen Kalavryta” (Operation Kalavryta) had just begun. In less than three hours the heroic town would be burned to ashes and only 13 of its male inhabitants would survive to keep the memory of their beloved ones alive, along with the shocking testimonies describing the Nazis’ atrocities.

While women and children were locked in the school and men were marching towards the hill by the town, Nazi soldiers were burning houses, churches and public buildings, looting and loading the spoils on trucks. The men who could see their own houses being burned down were ordered to dig their own graves. A few minutes later the signal for the mass execution was finally given and the machine guns began firing. At midday one of the most hideous atrocities Europe has seen in the 20th century was complete. Women and children managed to free themselves from the flaming school only to witness that the rest of the town was set ablaze and their fathers, brothers and sons were butchered.

The mass shooting at Kalavryta was the largest single massacre in Greece and it came as the Nazi response to an operation carried out by the partisans of ELAS, in October 1943, which left some 80 German soldiers dead. The order for the massacre was signed by the commander of the 117th Jägerdivision, Generalmajor Karl von Le Suire. Ironically, the “butcher of Peloponnese” was the grandson of Bavarian, Lieutenant General Wilhelm von Le Suire, who served as the War Minister of the Greece under his compatriot King Otto in 1833. His instruction was to “level” Kalavryta and the nearby village of Mazeika along with other villages the citizens of which secured support to the partisans. German reports describe how the participating military units torched within a few days 24 villages and towns, three monasteries (among which that of Agia Lavra where the Greek revolutionary flags had been blessed prior to the War of Independence) and executed 696 inhabitants. Independent as well as Greek sources, though, increase the number of those killed in Kalavryta and the surrounding area to more than 1.100.

According to survivors’ testimonies, the burial of those killed occupied the women -who managed to free themselves from the burning schoolhouse (certain sources refer to an Austrian soldier who pitied on them and assisted the escape)- for the next 40 days. At the same time, they also had to face starvation as the departing Germans, apart from the houses and the warehouses, burned nearby fields and had taken all food with them to cover the occupation army needs.

The school where women and children were locked up currently houses the “Kalavryta Holocaust Museum”, founded in 2005. The sight of the sacrifice, on top of the Kappi Hill is kept as a memorial site, decorated with a white cross and stones inscribed with the names of those brutally executed. The village’s churches clock minute hand remained frozen, pointing up the tragic moments of December 13th 1943. The commander of the Wehrmacht 117th Jägerdivision, Karl von Le Suire, who ordered the massacre -and witnessed it personally- died in 1954 as a prisoner of war of the Red Army in Stalingrad.

Some 50 years after the massacre the President of the Federal Republic of Germany, Johannes Rau, visited Kalavryta and stated: “I came here to keep the memory of this event alive in Germany. Here, at this place, I feel immense grief and shame. Only one who knows and accepts his part can find the path to a better future”, adding that the two countries have “the opportunity to shape a European future of peace, democracy and respect for human rights. In such a Europe atrocities and destruction have no place”.