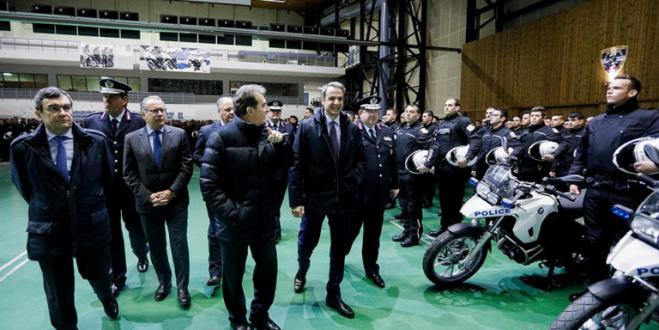 Kyriakos Mitsotakis underlined the government's decision to strengthen the police's human resources and equipment, with immediate, tangible results in the safety of citizens, at the presentation of the new DIAS team at the Markopoulos training center.

Residents of Attica will now see a patrol next to them, the prime minister noted emphatically, in the presence of the political and physical leadership of the Police, because, he continued, the police officer should be on the road, not in the offices, on the road against small and large. everyday lawlessness, thus restoring the sense of security. Our neighborhoods will have more protection in the near future, was another key phrase of Kyriakos Mitsotakis' greeting.

Indeed, Mr. Mitsotakis cited his mandate in the recent elections, with the Greek people asking him for three things:

What we have said, we are doing, the prime minister insisted, focusing on the fact that one of the first programmatic commitments of the government was to strengthen the police manpower and modernize the means at its disposal: thus referring to the completion of the recruitment competition for personnel, also for the supply of 450 patrol cars, bulletproof vests, communications equipment, and so on.