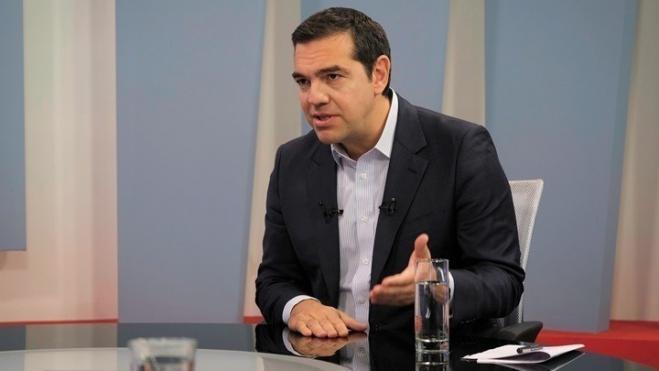 Main opposition SYRIZA leader Alexis Tsipras underlined the necessity for a "national line" on Greek-Turkish relations in an extensive interview with the newspaper "Vima" published on Sunday, while repeating that SYRIZA "will not do what [Prime Minister Kyriakos Mitsotakis] did to me, on national issues."

"I will not follow him down the slippery path of populist opposition and flag-waving. Where consensus is needed we will give it. Where criticism is needed, it will be constructive," Tsipras said.

He was strongly critical of the prime minister's stance on the election of the new Greek president and said that Mitsotakis should set aside the "presidential beauty pageants", especially at a time of tension of Greek-Turkish relations, while accusing him of "unbearable light-heartedness bordering on irresponsibility."

"He should speed up the re-election of Pavlopoulos with a large majority and immediately afterward ask for the Political Leaders' Council to convene under the re-elected president, so that we can decide on the fundamental lines of the national strategy toward Turkey," Tsipras said.

Tsipras expressed concern over developments in relations with Turkey, while noting that the common position expressed by all the political forces in Greece was clear:

"Our country will not tolerate any attempt to dispute our sovereign rights. In this framework, I consider the support of the Armed Forces a part of our common national strategy. Hence, SYRIZA voted in favour of the defence budget and the article for the modernisation of Mirage and F-16 aircraft - a discussion that had been going on for many years and was finally concluded in my meeting with President Trump in 2017," Tsipras said.

On Mitsotakis' visit to the White House, Tsipras said the Greek premier must push for clear statements from U.S. President Donald Trump on Washington's stance with respect to Turkish threats, linking this to a draft bill on upgrading Greek-U.S. defence cooperation. "If the statements against Turkish provocativeness and in favour of the 3+1 scheme and the EastMed pipeline are not clear - even more so if there aren't any - I think we should re-examine aspects of this cooperation," Tsipras said.

In other parts of the interview, the main opposition leader referred to the system of simple proportional representation, stressing that this was "here to stay" and criticised the present government for failing to push for lower primary surplus targets. He also criticised the government on law and order, noting that it was almost exclusively focused on the anti-establishment scene and Exarchia while overlooking serious crime, such as drug and human-trafficking, protection rackets and white-collar criminals.

On the direction to be taken by SYRIZA, Tsipras said the party was striving to create a new Left and was opening its doors to anyone who understood the importance of a "large, colourful, modern, leftist party in the age of right-wing monsters" and by seeking alliances with all those that understand that fragmentation or, even worse, hostility within the democratic area leads nowhere.