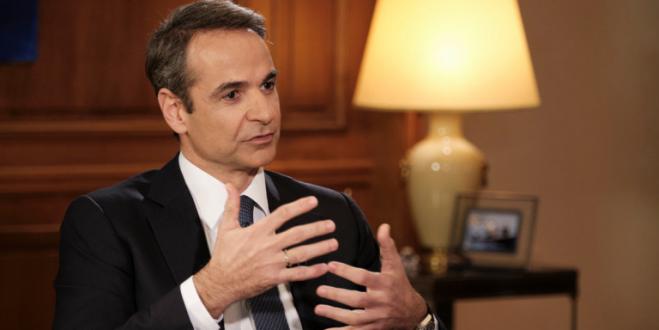 "This office was not unknown to me, I remember my father here. But I had not entered politics to become prime minister, "he added.

Mitsotakis: Every prime minister's office is a golden cage

Kyriakos Mitsotakis, however, stressed that he did not want to lose contact with the world. "Every prime minister's office is a golden cage. I want to remember that I'm not here permanently, I'll leave sometime. I do not want this virus of arrogance and pride to be grafted on me," he noted.

Mitsotakis on Tsipra's advice on drinking water and exercising
"And I will continue to do tours, and if I do go on a mountain trip, Mr. Tsipras advised me to drink water and exercise," he joked after discussing with SYRIZA's president his trip to the US .

Mitsotakis: I have no reason to hold early elections
"There are no early elections. Why would I do that? I have full confidence in the ability to implement our government program and win elections at the end of 4 years. They may be double [elections]. I am confident that what we will do will work and in 2023 we will be able to say what good we did, what good we will do and what those who choose something different will have to lose,” he said of early elections. Kyriakos Mitsotakis noted that in 2023 there could be a double election, since no autonomous government would emerge with a simple proportional system.

Mitsotakis: I've had a great political career by being underestimated
However, Kyriakos Mitsotakis saved the best for the end. "My only job is to use the four years to make people's lives better and then ask for a renewal of the mandate without ever considering the election result" to add: "I've made a political career out of being underestimated by my political opponents. I don't underestimate anyone. I have an opportunity for us to make the jump together for the future. I have ambitious plans for Greece. "