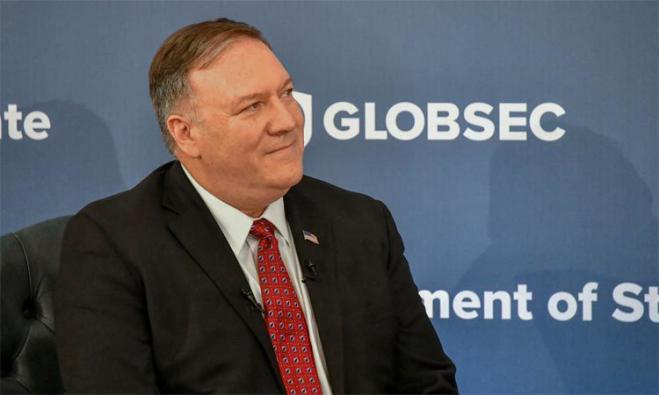 US Secretary of State Mike Pompeo expressed his country's full support for Greece in a letter to Greek Prime Minister Kyriakos Mitsotakis unveiled by the Greek government on Tuesday.

"We consider Athens a key ally and a crucial player in the Eastern Mediterranean as well as the Balkans," Pompeo underlined in his letter, adding that the US will remain committed to supporting Greece's prosperity, security and democracy.

In the letter, released by government spokesperson Stelios Petsas, Pompeo said that the signing of the Mutual Defence Cooperation Agreement (MDCA) "is a turning point in an enhanced security partnership between Greece and the United States," adding that the two sides are "forging a much closer strategic relation through the MDCA". He underlined the excellent relations between Greece and USA, noting that US president Donald Trump had described them as "extraordinary" during the Greek PM's recent visit to Washington.

Moreover, Pompeo also said that Mitsotakis' visit to the US "was a clear reaffirmation of the close ties and cooperation between our two countries," while also reaffirming Greece's emergence - after almost a decade of crisis - as "a success story of economic recovery," while in the process demonstrating "a remarkable social cohesion and strong democratic institutions".

Pompeo also added that the US is closely following developments in the region and stands firm in its belief that those with interests in the Eastern Mediterranean should seek solutions through peaceful means, consistent with Article 33 of the United Nations Charter, and refrain from any action or declaration that could be provocative.

"We do not need an escalation of tensions in the region but rather candid dialogue that will lead to outcomes that respect international law," the letter concluded.

In comments after releasing the letter, Petsas stressed that Greece was replying to Turkish provocations and bravado with "national confidence" that relied "on our ability to do whatever is necessary, international law and our alliances."

"In this letter, the United States do not only speak of an obligation to resolve differences through peaceful means and to avoid provocative actions and declarations. They chiefly stress - twice, in fact, in the same letter - that the 'US will remain committed to supporting Greece's prosperity, security and democracy'," Petsas pointed out.

He also highlighted Pompeo's statement that "we will keep supporting you as a leader in Europe", and his description of Greece as a "key ally and a crucial player" in the region.

"It is clear that the letter of the US Secretary of State reaffirms that relations between Greece and the US are at their best level in recent decades. At the same time, it is a stinging reply to those that sped to denigrate the prime minister's visit to Washington," the spokesperson said.

Commenting on the results of the Berlin Conference on Libya, Petsas said that these were a "good first step" for two reasons: on the one hand, because all the sides reaffirmed their willingness to seek a political solution and, on the other hand, because they repeated the need to impose an arms embargo on Libya. As Greek Foreign Minister Nikos Dendias had said, these were a first step and Athens was now waiting for the continuation of the Berlin process, as well as its own inclusion in the next stages of this process, Petsas added.

He pointed out that the EU's High Representative for Foreign Affairs and Security Policy, Josep Borrell, had given assurances that the EU's position that the Sarraj-Turkey memoranda are "illegal and void" remains unchanged.

Petsas concluded by presenting the premier's schedule for the coming week, announcing that Mitsotakis will be departing for the World Economic Forum in Davos on Wednesday afternoon, where he will remain until Friday. On Monday, the prime minister is to attend events at Auschwitz commemorating the 75th anniversary since the liberation of the concentration camp, while on Tuesday he will speak in

Parliament during the debate on the labour ministry draft bill establishing a birth allowance for each newborn.
The spokesperson lastly welcomed the new alternate government spokesperson Aristotelia Peloni.