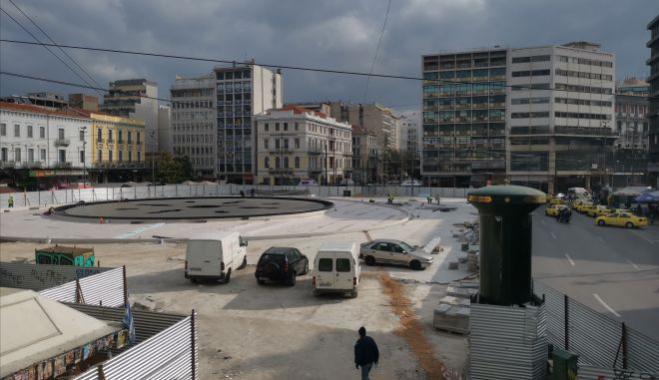 The works for Omonia Square, which was fenced off last year and is not accessible to citizens is in the final stretch.
The historic square is changing once again, and it seems the intention is to ake on something similar to its old form with the fountain, though the pedestrian crossing that joins Panepistimiou and St. Constantine streets  remains.

"Citizens of Athens will only have to wait a few weeks to see the new square with their own eyes," sources in the Athens municipality told media, saying a countdown has now begun to complete the works. donations made by the technical company Elector, the Laskarid Public Benefit Foundation and Fontana Fountains.

Indeed, as the photos of News 24/7 show in the square, the fountain which is 30 meters in diameter, with a central jet and eight others around it, has already been placed, and work is continuing at a feverish pace, since adhere to the original schedule according to which the square would have been delivered at Christmas.

The first fountain was placed on the square in 1960 and since then Omonia was ynonymous with it. Indeed, later in 1990 the sculpture "Runner" was also placed, that was later moved to the Hilton area. A few years before the 2004 Olympics, the square changed its appearance and stopped being a circular hub for vehicles, after the connection between Panepistimiou and St. Constantine streeets was established.

The fountain was removed and the design was strongly criticized as cncrete dominated the square. It appears that the intention of the current municipal authority, in conjunction with the donors, is to return the trademark fountain and increase the green spaces.