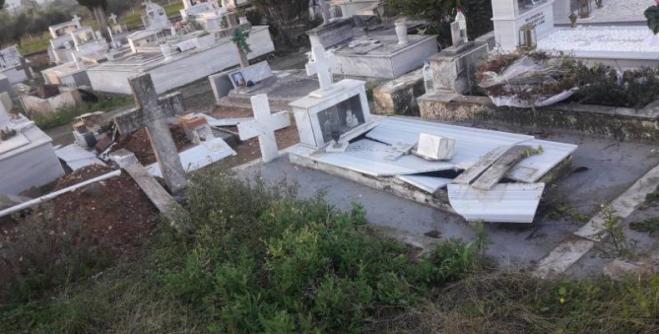 The macabre incident that has shocked public opinion involved three minors, one 15 and two 12 years old, who helped the 21-year-old break into graves in order to steal gold jewelry that the dead might have worn!

The first tomb they broke was that of the wife of a well-known doctor in Kalamata, whose body - in advanced decay - was pulled out by her legs by the two older vandals and was posed sitting with her legs crossed so that she "faced" towards the entrance to the cemetery!

And while the two 12-year-olds were terrified by the macabre sight and left running from the cemetery, the 21-year-old and 15-year-old continued vandalizing another five tombs and the cemetery church, looking for valuables! It is unknown what they found, but the 21-year-old continued his activity in Plati village and other communities until he was arrested last Thursday afternoon for breaking into a butcher shop without stealing anything and then heading into thee butcher's house!

The butcher was inside and pursued the 21-year-old Roma, while alerting the police. After investigations, police officers found him, arrested him and brought him to Kalamata Security for interrogation. There, it turned out that by December 12 he had committed a total of 11 other burglaries and attempted thefts of vehicles, homes and a plot of land in the local communities of Plati, Agios Floros, Agios Konstantinos and Arfara of the Municipality of Kalamata and had seized money, electronics, objects, and tools. He has already been taken to the Kalamata Public Prosecutor, while the investigation is continuing to determine if he has committed further burglaries.