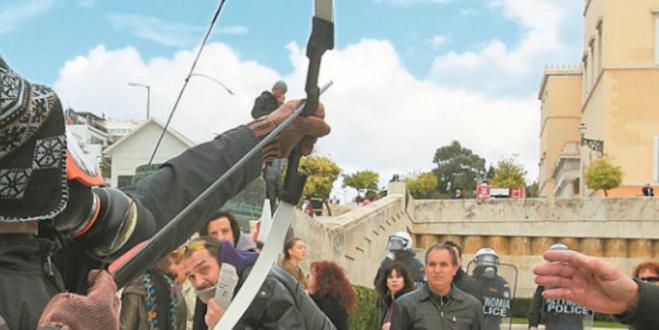 The fugitive, also known as the "Archer of Syntagma Square" was arrested early Thursday morning in Agia Paraskevi in a stolen car, in which heavy weapons were found.

In addition to the "archer", the authorities handcuffed two more women, one of whom was a close associate of Pola Rupa.

The Counterterrorism Service has traced the "archer" Yiannis Michaelides after a coordinated operation, with reports saying the 32-year-old has been under surveillance for some time. It is recalled that the "gunman of the Constitution" had escaped from the Tyrinth prisons last June.

Counter-terrorism says they were preparing a 'blow'
This is of great concern to ELAS. it is possible that the three detainees were planning a "hit", after heavy weaponry was found in the stolen car. The weapons comprised a Kalashnikov assault rifle, an UZI sub machine gun and at least two pistols. In fact, the two pistols were carried by the "archer" and Rupa's associate, with bullets in the chambers.

Since their arrest in Agia Paraskevi, the Counter-Terrorism Office has launched investigations to determine the activities of those arrested, as well as whether they have been involved in any illegal activities that have taken place recently. At the same time, the possibility of having a hideout in the wider area of ​​Exarchia is also being investigated.

The "archer" and the others arrested
The "Archer of Syntagma Square", Yiannis Michailidis, had alerted the authorities when last June he fled from the agriculturall prison of Tyrins. In Tiryns he was in charge of guarding the sheep of the prison, in a fenced off area outside the correctional facility.

The detainee has been charged with participating in the "Nucleii of Fire Conspiracy" group, for conspiracy to commit double robbery in Velvento Kozani, while serving a 13-year sentence in a rural prison after his conviction in 2015 for engaging in a firefight with a police officer.

Then, after the episodes, he was arrested and prosecuted for a felony charge of attempted murder. He was subsequently referred for deposition to a regular investigator and released on restrictive terms. On the bow, when asked, he claimed it was fake and that it could not pose any danger. He also stressed that he had taken it with him for symbolic reasons.

The two women arrested
As for the two women who stole the car, one is a 28-year-old Pola Rupa collaborator of the "Revolutionary Struggle" who had been arrested with her three years ago in an operation in Heliopolis and Agios Dimitrios. The second woman is a 26-year-old girlfriend of the "Archer of Syntagma Square".