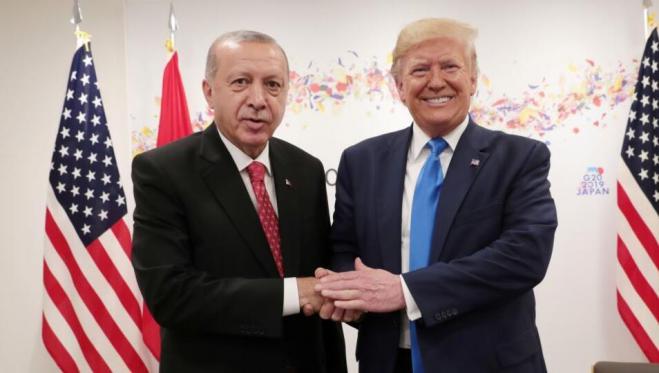 Donald Trump appears to be the president who does not hesitate to satisfy every request of Turkish President Recep Tayyip Erdogan.

A president who is on good terms with Chinese President Xi Jingping to serve his own interests.

This is how Donald Trump appears in the book by John Bolton, a former US national security adviser.

Excerpts from the book are published by the New York Times. The US president's side denies what was said in the former adviser's book while not authorizing it, and John Bolton himself refuses that  he gave his draft to the New York Times.

The book also contains revelations about Trump's relationship with Ukraine, a case that led to his impeachment.

According to a report in the newspaper in 2018, President Recep Tayyip Erdogan of Turkey phoned an unusual request for President Trump. He asked if he could intervene to halt an investigation into Halkbank, one of Turkey's largest state-owned banks, which was under US control over a possible violation of US sanctions on Iran. And this was not the only attempt by the Turkish president to influence Donald Trump.

"Trump Offered Facilities to Erdogan"
According to the New York Times, the Turkish government had hired a well-known lobbying firm owned by President Trump's close friend and financier to pressure the White House and the US State Department. "Erdogan's influence campaign is being re-examined in Washington, following the revelation that John Bolton, a former US national security adviser, was concerned about the fact that the US president offered facilities to Recep Tayyip Recep Tayyip."

"Trump plays a sometimes annoying role"
"Several members of the government had concerns about the president's relationship with authoritarian leaders," said Senator Chuck Schubert. "Does the president jeopardize his financial interests when talking to Erdogan and others? Maybe his children have some financial interest," the Senator added.

Former government officials said in interviews, in John Bolton's book, that President Trump plays an unusual and sometimes annoying role in investigations involving foreign governments.
"What I know about his intervention in the Halkbank case is extremely bizarre and quite alarming," Philip Zelikov, a history professor at the University of Virginia who served on the National Security Council under President Bush, told the American newspaper.

Trump's involvement in the Halkbank investigation
According to the American newspaper, President Trump's involvement in the Halkbank investigation began in 2017. Turkish President Erdogan, in a series of telephone conversations in 2018 and 2019, repeatedly tried to persuade the US president to use his power to force not imposing additional sanctions on Halkbank.

Erdogan's brother-in-law, who holds the post of Turkey's finance minister, has repeatedly pressed US Treasury Secretary Steven Mnuchin over the same issue, and the Trump Tower project manager in Istanbul has also played an important role.

According to the American newspaper, the Turkish bank had hired a company specializing in lobbying, owned by Brian Ballard, one of the major funders of President Trump's election campaign. The company has reminded the State Department and the White House for months that any sanctions against the Turkish bank could destabilize the Turkish economy.

"For months, it has seemed that Turkey will succeed in this unusual pressure campaign - asking a president of the United States to put pressure on his own justice department to protect a state bank .... Only after Turkey invaded Syria in early October did the justice ministry move to impose sanctions on the bank. "