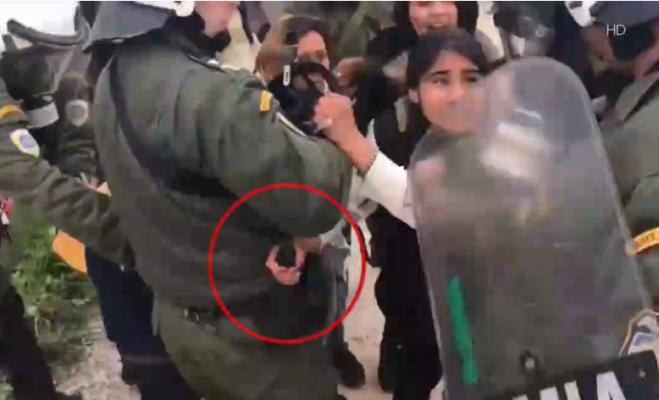 During the incidents caused by illegal migrants on the Greek island of Lesvos photographs were taken of a female Afghan protester attempting to take the pistol of a police officer.

Police have made arrests and prosecutions for incidents that have been taking place since morning (03 Feb.) in Moria, Lesvos. Women among the illegal immigrants involved in the incidents attacked the police squad.

The woman is shown in a scene while the platoon acts to repel the riots in Moria Lesvos on the side of the rebellious illegal migrants attempting to seize a MAT platoon Police Officer's pistol from its holster.

The snapshot has been captured on video and photographic footage but no action has been taken by Greek Police to investigate the incident and attribute responsibility to the Afghan who attempted to seize the officer's weapon and equipment.

According to police sources speaking to Nantiarepor.gr, the police had clip-locked the weapon he was carrying which is why the Afghan woman failed to seize it.