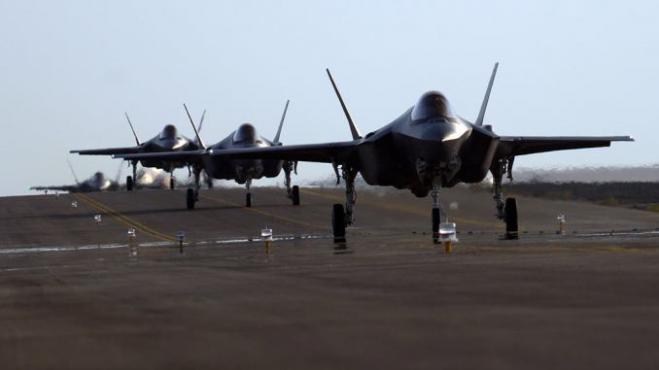 Greece has announced plans to upgrade its existing fleet of fighter jets as well as acquire new U.S.-built fifth-generation F-35 Lightning II aircraft in a move that might give its military a technological edge over neighbouring Turkey.

by Paul Iddon writing for Ahval

In December, Panagiotopoulos announced that 84 of them would be upgraded to the advanced Viper class by Lockheed Martin by 2027, at a total cost of approximately $1.5 billion for Athens.

Additionally, Greece plans to upgrade its smaller fleet of French-made Mirage 2000 multirole fighters, also over the next seven years.

According to the 2019 Military Strength Ranking, which utilizes more than 55 individual factors to determine the strength of a nation, Greece has the 28th most powerful military in the world while Turkey has the ninth.

Levent Özgül, a Turkish defence analyst for Blue Melange Consultancy, said a purchase of F-35s “will be the most important milestone and capability jump for Greece and the Hellenic Air Force (HAF).”

This is because of the F-35’s advanced capabilities, such as its long-range, networking and stealth features.

Greece’s intended purchase of F-35s and plans to modernise its existing fighter jets came amid a period of rising tensions with Turkey. On December 17, Turkish jets violated disputed airspace over the Aegean Sea 40 times, resulting in 16 “mock dogfights” between the two NATO members that day. The simmering tensions in the Aegean came at the same time as Turkey and Greece sparred over competing claims to areas of the eastern Mediterranean, where both countries seek a share of lucrative hydrocarbon discoveries.

While the stealth features of the F-35s will likely give Greece an advantage over Turkey’s larger air force, Özgül noted that the aircraft is neither a dogfighter nor nearly as manoeuvrable as advanced Russian Sukhoi fighters, but is an “ultra-intelligence stealth aircraft.”

“Therefore, we cannot see F-35 dogfights over the Aegean because Turkey probably cannot see or trace them,” he said.

Sebastien Roblin, a writer on military aviation for The National Interest, noted that, to date, air forces “have tried to keep their F-35s out of circumstances in which they could be studied by potential adversaries or even neutral third parties.”

“The more information they collect on the stealth aircraft’s tiny radar signature, the more easily it could be detected and identified in the future,” he said.

“So, if Greece gets F-35s, and I think it’s likely such a sale would be authorized if the finances can be squared, the HAF might hesitate to use them in its confrontations with Turkish fighters.”

However, Roblin recalled an incident in which US Air Force F-22 Raptor stealth fighters surprised Iranian F-4 Phantoms in the past by coming within visual range of them.

While Greek fighters attempting a similar stunt to surprise Turkish aircraft over the Aegean “is not unimaginable, it just might come with the tradeoff of allowing Turkey to learn more about the F-35’s characteristics,” he said.

Turkey was a member of the F-35 manufacturing programme and ordered 100 of the fighters from the United States, but Washington suspended its participation in the programme and cancelled this order following Ankara’s purchase of sophisticated Russian S-400 air defence systems.

The United States had warned Turkey against purchasing that system, repeatedly insisting that the F-35 cannot coexist with the S-400.

Özgül also noted that upgraded F-16s and Mirage 2000s would give the HAF “greater air superiority, an improved ability to carry out combat air patrols, close air defence, maritime strikes, suppression and destruction of enemy air defence, along with greater precision and deep strike capabilities over the Aegean Sea and the Central and Eastern Mediterranean basins.”

With these warplanes we could potentially see “huge Greek dominance over the Aegean and Mediterranean,” he said.

This isn’t, he added, “only due to the capabilities of these jets, but also since NATO, the EU, U.N., United States and Eastern Mediterranean Gas Forum all support Greece legally and diplomatically,” in its disputes with Turkey in these areas.

George Tzogopoulos, a Senior Research Fellow at the Centre International de Formation Européenne (CIFE) and Research Associate at the Begin Sadat Center for Strategic Studies (BESA), is unsure if “the National Defence Authorisation Act for 2020 that blocks Turkey’s participation in the F-35 programme will not be reversed.”

“More importantly, I cannot anticipate how Ankara will react if this Authorisation Act isn’t reversed and only Greece possesses F-35s in the future,” he said.

“It will definitely look for serious alternatives, possibly from Russia, to empower its position.”

In recent months, Turkey suggested it might acquire super-manoeuvrable Russian Sukhoi Su-35 and possibly fifth-generation Su-57s over the next decade following its removal from the F-35 programme.

“Turkey also needs time to compensate for its removal from the F-35 (programme),” Özgül said, pointing out that Turkey’s planned fifth-generation TF-X fighter project will likely be delayed for at least another decade and its F-16 fleet, the backbone of its air force, is ageing.

Furthermore, the Turkish Air Force has also been affected by a severe shortage of F-16 pilots since the July 2016 coup attempt.

In addition to possibly buying Su-35s or Su-57s, Özgül also anticipates Ankara will respond to a Greek purchase of F-35s by deploying “the two Russian S-400 batteries of its second squadron on its Aegean and Mediterranean coasts rather than in Malatya Airport” in eastern Anatolia.

Tzogopoulos argued that while “deterrence matters” the mock dogfights over the Aegean “lead nowhere.”

It is against this backdrop that Washington may sell F-35s and also allow Greece to participate in the programme’s development.

Özgül said that the Hellenic Aerospace Industry was interested in participating in the F-35 production programme. The United States is removing Turkey from that programme – which would have given Ankara a lucrative role in manufacturing approximately 1,000 parts for F-35 operators worldwide – over its aforementioned purchase of S-400s.

“The extension of the defence cooperation between the United States and Greece, stamped during the visit of US Secretary of State Mike Pompeo to Athens in October 2019, paves the way for such an enriched military cooperation between the two countries that can also include the fifth-generation stealth fighters,” Tzogopoulos said.

He said he considered a new Greek-Turkish crisis likely in the future, and stressed that this would not be in the interests of the United States. However, at present, this is “an issue of minor importance for American foreign policy,” he said.

“The question for Washington is whether the excellent status of the Turkish-Russian partnership will acquire a strategic depth,” Tzogopoulos said. “This will be the catalytic factor for US decisions in the long-term.”