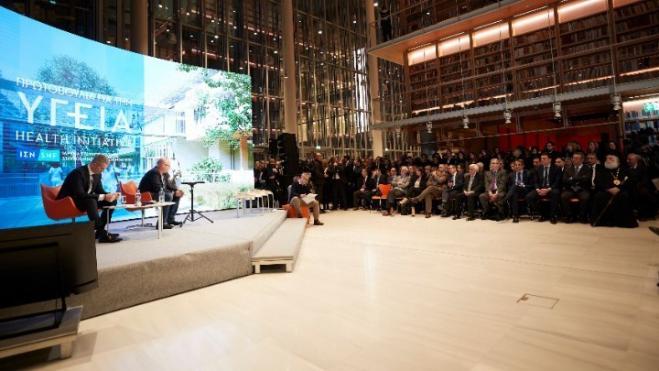 The Stavros Niarchos Foundation's (SNF) goal is to improve health services for a better life, SNF President Andreas Drakopoulos said on Thursday, unveiling a health partnership with the Greek government that will include three new hospitals and other initiatives worth a total of 420 million euros in funding.

The details of the partnership were unveiled by Drakopoulos at a discussion at the SNF Cultural Center, in the presence of Greek President Prokopios Pavlopoulos, Prime Minister Kyriakos Mitsotakis, the leadership of the Health ministry, ministers and MPs, academics and the general public.

Komotini General Hospital (to be completed June 2024), Sparta General Hospital (2025) and the Thessaloniki Pediatric Hospital (2024) will be designed by Renzo Piano, who also designed the complex that includes SNF's Cultural Center, the National Library and the National Opera, and who attended the event. Each general hospital is budgeted at 90 million euros, and the children's hospital at 150 million euros.

Built and equipped by the Foundation, the three hospitals will be part of the National Health System (ESY), but will have administrative independence. Staff wages and setting up related support infrastructures  will be the state's responsibility. Renzo Piano, speaking in detail about the hospitals, said that his team was interested in creating high-quality and environmentally-friendly hospitals with a lot of natural light.

Drakopoulos also announced the organization's gift of two aircraft and two helicopters - added to the gift of 143 ambulances for the emergency first aid service (EKAV) - for the transport of patients; funding and boosting University of Athens Nursing School programs; updating equipment for the Evangelismos Hospital in Athens; and providing new equipment for hospitals in the cities of Heraklion, Ioannina, Larissa and Alexandroupolis.

These actions will include the purchase and installation of PET scanners at selected state hospitals of Greece, and training programs to manage trauma and to prevent hospital infections.
Drakopoulos said that SNF had begun implementing its grants throughout Greece after signing a memorandum of collaboration with the state in March 2018. "We are a unified team working for the upgrading of health," he said.

Additional information on the initiatives was provided by Health Minister Vassilis Kikilias, who said that the emergency sections at Evangelismos will be updated through grants by SNF, the Martinos family and Aliki Perroti. He also noted that a draft bill to be tabled in Parliament early in March includes provisions on help at home.

The public asked questions about the hospitals at the event, and questions were also raised by former health minister Pavlos Polakis, while in an address earlier at the event Greek President Pavlopoulos had called SNF's initiatives on health an indicator of civilization.

Prime Minister Mitsotakis plans to boost the state's partnership with private agencies in health, and is committed to overcoming bureaucratic obstacles through fast-track procedures to ensure the timelines of projects are kept, government sources said, pointing out his active interest and presence at the event.

The government announced that it would table a provision in Parliament next week that would provide tax incentives for volunteer and for sponsorship programs, and will relieve gifts from the obligation of a 24 pct VAT.