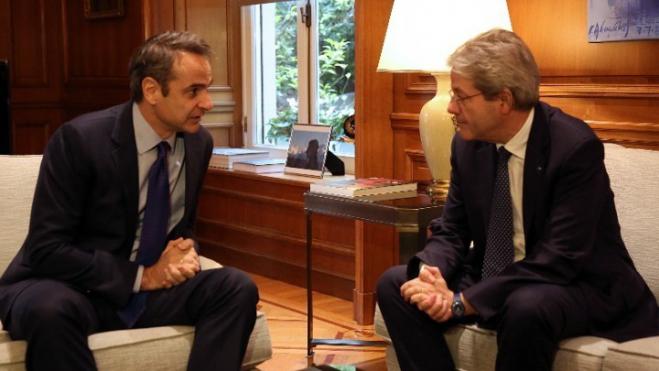 Prime Minister Kyriakos Mitsotakis had a meeting with the European Commissioner for Economy Paolo Gentiloni on Thursday.

"I think we have made great progress in the last seven months, which is reflected in the capital markets and the wider economic climate. We are a government that is fully committed to an ambitious reform agenda and we have been fully credible in meeting the budgetary targets, informing our interlocutors that we will meet the fiscal targets for 2019 and 2020," Mitsotakis said and added:

"But during the year, soon and without delay, we expect that a discussion will begin on reducing primary surplus targets as of 2021. I believe this is perfectly reasonable and I am pleased that you have acknowledged this and we are ready to begin this discussion," Mitsotakis said.

On his part, Gentiloni replied: "Yes, I believe that the European Commission is certainly supportive of the start of this discussion. The decision will be taken by the Eurogroup, but as long as Greece maintains this momentum in reforms - you have very positive economic figures overall - and I believe that with this momentum the discussion on these goals can be reopened and the European Commission will be supportive."

According to government sources, during the meeting there was an extensive discussion on the state of the Greek economy, as well as its prospects, as recent figures show significant progress in a number of areas.

The same sources reported that positive developments were also noted in the fiscal area, reflected in the reception of Greek securities in international markets, the country's credit ratings and historically low interest rates on Greek bonds.

Mitsotakis reiterated to the European Commissioner a number of Greek priority issues in fiscal policy and structural reforms.

In addition, in the context of the Green Deal announced last December, they discussed actions to be taken by the European Commission to achieve greenhouse gas emission reduction targets by 2030 and the key objective of climate neutrality by 2050.

The prime minister, according to the same sources, reiterated Greece's commitment to work towards a "greener economy" within the agreed global and European levels and stressed the importance of adequate funding for a fair transition of coal and lignite areas in Europe and Greece.