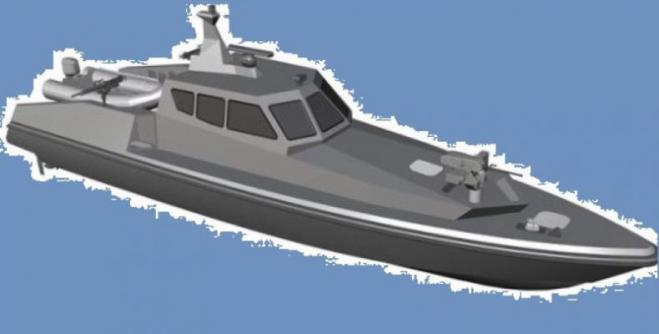 It is the high-speed vessel AGINOR designed by a team of Greek shipbuilders to meet the needs of our country's special forces and is currently being built at the Skaramaga shipyards. According to Mr. Panagiotis Alourda, the original AGINOR boat is a high performance boat made of aluminum alloys. The boat has a slider hull with a high lifting angle and innovative features.

For his part, Mr. Anastasios Kyprianis referred to the preparations of the Skaramanga shipyard for the implementation of the project as well as the specific requirements of the aluminum manufacturing processes to organize the production process and to ensure the quality of construction.

The vessel under construction has a total length of 17.6 meters, a total width of 4.2 meters, a draft of 0.95 meters, a displacement of 22 tonnes and a variable payload of 4.5 tonnes. AGINOR was designed to be able to carry out missions of special forces infiltration, deterrence and coastal patrol as well as search and rescue.

To carry out the above missions, the vessel will be equipped on board with a stabilized remote-controlled armament platform with a full day / night sensor package and a 12.7 mm machine gun, two 7.62 mm machine guns. positioned on either side of the stern, as well as a slide on the stern, which will allow the removal and collection of a 5-meter high-speed inflatable boat that can carry a group of commands.

The crew of the boat is made up of four people, while AGINOR will be able to carry a fully equipped special forces detachment seated inside on special vibration absorbing seats. The vessel will be equipped with a navigation radar, a day / night electro-optical system, and a regular communications system.

The maximum speed of the vessel at full load and at sea state 1 shall be more than 45 knots at the maximum power of its two engines. AGINOR will be able to operate at sea state 4, while its radius of action will reach 350 nautical miles at a speed of 35 knots. This means that AGINOR will be able to sail from the Salamis Port and reach Samos with the fuel to return without refueling.

It is worth noting that the ship's designers have foreseen the installation on board of a mini tactical battle management system if required, which can be interconnected with the maritime radar, electro-sensor complex, ESM / ELINT system if fitted, armament platform, surveillance radar if fitted, UAV, communications system and regular data link system, allowing interoperable use of the vessel within a maritime digital operations space.

With this system, which is worth noting that is Greek designed and manufactured, the vessel will be able to exchange information safely and quickly with other high speed "digital" vessels, as well as other inland units which operate in the wider area.

With this system a group of vessels such as AGINOR will be able to operate as a fully integrated impact force under the supervision of coastal and airborne sensors and platforms and to exchange data and information.