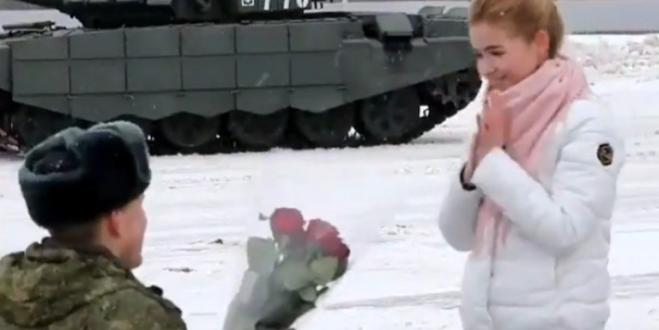 A Russian lieutenant put on a great Valentine's Day party and made a wedding proposal to his beloved surrounded by a "heart-shaped" tank detachment.

In a video released today by the Russian Ministry of Defense, sixteen T-72B3 tanks can be seen forming a heart in the snowy landscape at the Alabino military base near Moscow.

Then Lieutenant Denis Kazanchev takes the hand of his beloved Alexandra Kopitova and takes her, with her eyes closed, to the center of the heart formed by the armored formation, according to images shown by the Russian army television network Zvezda.

Watch the video with the marriage proposal:

Tank commander, Kazanchev kneels down and asks her to marry him, holding a bouquet of roses in his hand.

"We have been together for a long time. We have overcome the trials of time and distance. Marry me!" said the soldier to Kopitova, before giving her an engagement ring.

"I didn't understand what happened," the young woman told the army television network about her novel marriage proposal. "It was unexpected!" She added.