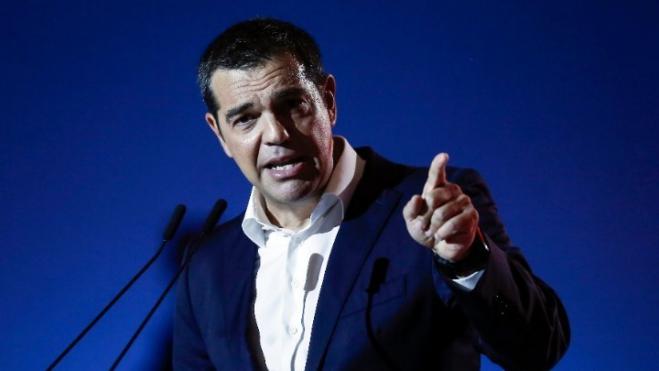 Syriza leader Alexis Tsipras criticized Prime Minister Kyriakos Mitsotakis for not claiming, as he said, additional funding from the EU's Cohesion Fund, in a doorstep statement at the Pre-EU Council Meeting of the Party of European Socialists (PES) in Brussels on Thursday.

Tsipras said that the first EU multiannual budget after the crisis saw spending on social cohesion "unfortunately decreasing instead of rising," and noted that "Greece lost a quarter of its national wealth" during the financial crisis. He mentioned that when he was prime minister he fought "persistently and methodically for additional cohesion funds of 7.5 billion euros, as a minimum recognition of the sacrifices of Greeks, in order for Europe to stay united."

The Syriza leader called this "a development that is negative for the future of Europe," and said he will raise his concern about the reduction of cohesion funds at the PES meeting.
He also announced that he would call on socialist leaders to support Greece's demand to participate at the next Berlin summit for Libya, "as Greece cannot be a country that stays out of this process, which concerns developments directly related to its sovereign rights."

The Cohesion Fund is aimed at EU member states whose Gross National Income per inhabitant is less than 90 pct of the EU average.

Greece lost 25 pct of its GDP during the crisis, and has every right to expect a corresponding funding support, not shrinking of its share in EU funds as is being proposed, SYRIZA leader Alexis Tsipras said at the Party of European Socialists (PES) meeting ahead of a European Council meeting in Brussels on Thursday.

The funding proposals tabled by the Romanian presidecy of the Council, incorporating Greek proposals, would have been rejected if presented during his government, Tsipras was quoted as saying by party sources.
The main opposition leader, sources said, raised the risk of increased scepticism against Europe if the EU Cohesion Fund budget were to drop by 44 billion euro and the Common Agricultural Policy funding also greatly reduced. There are two issues at risk, he said, one being the total cohesion funding and another their fair distribution, which should be based on strengthening countries, he said.