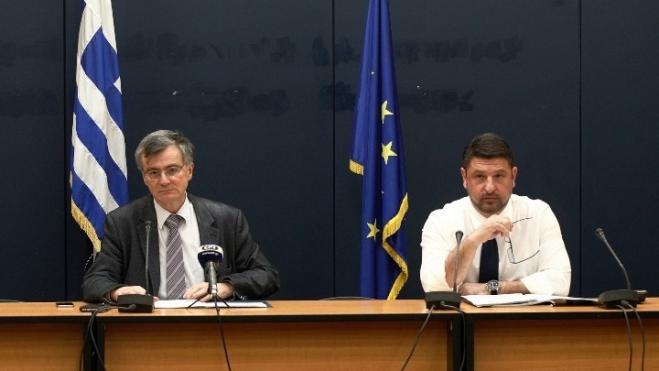 At the daily briefing, epidimiologist Tsiodras announced that there were now 31 new coronavirus cases diagnosed since Tuesday, with the total reaching 418 people.

Tsiodras said of these, 79 are hospitalized and 13 of these in particular are in intensive care.

Tsiodras further said that mathematical models pointed out to 2,000-3,000 people being infected in Greece at this point. A total of 6,000 tests for coronavirus have already been done, which resulted in the 418 confirmed diagnoses.

As to patients in intensive care, they are mostly around 70 years old and are receiving a cocktail of medications to fight the virus.

Speaking of possible therapies for advanced cases, the professor said that Greece had made selective use of French protocols, which showed a 96 pct success in therapy. In addition, China has been using a new drug which helps destroy the virus in four days, he noted.

Tsiodras refuted as fake news media reports that diagnostic tests carried out so far were few and therefore minimised the disease's true spread, calling on colleagues to "stop spreading the wrong message and creating an epidemic of fear and panic." The focus of tests and checks was on patients with serious symptoms, he said, while the spread of the disease was being adequately monitored under international guidelines. For this purpose, the authorities were planning 500 at-home visits to suspect cases to collect samples for testing.

There are enough tests for all cases that require testing, he asserted, including for medical professionals themselves.

At a daily televised briefing on Wednesday evening alongside professor Sotiris Tsiodras and Deputy Minister of Civil Protection Nikos Hardalias, Kontozamanis also said the government had made a list of specific requests to the private sector and individuals for donations of equipment.

In particular, he noted the recent donation of 50 respirators each for ICU beds by Papastratos and Motor Oil.