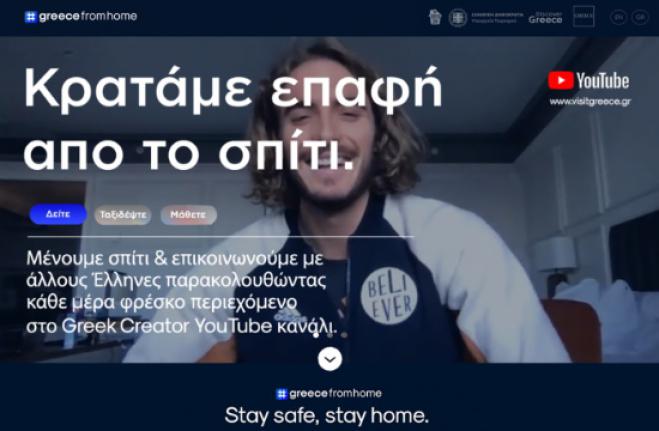 An online platform called “Greece from Home” was launched by the Ministry of Tourism, the Greek Tourism Organization, and Marketing Greece, with the support of Google, aimed at reinforcing the country’s positive image during the COVID-19 pandemic.

The central aims of the initiative are to assist people around the globe to stay in touch with Greek culture and discover and be inspired by the country’s attractions, and for tourism professionals to enhance their digital skills with the help of Google – and all this while staying home.

The YouTube Channel also offers dozens of videos– from learning how to cook to brushing up on your Greek language skills, to digital daydreaming while you cruise around the beautiful islands of Greece.

According to Greek Tourism Minister Harry Theoharis, the #GreeceFromHome platform is part of the government’s overall strategic response to the COVID-19 pandemic.

“In addition to taking measures to protect public health, shield and restart the economy and rebuild Greek society, the government is also taking steps to strengthen and manage the image of our country as a tourism destination,” the minister announced on Thursday during a web press conference he held to introduce the platform to the media.

The minister also stressed the cooperation between the public and private sectors for the initiative.

“It is particularly important that, in these difficult times, the public and private sectors work together to support Greek tourism, while also cooperating to prepare for the next day,” Theoharis noted.

The design of the #GreeceFromHome platform was done by the Chief Creative Officer of the Greek Government, Greek-Canadian Steve Vranakis, and his creative teams Ithaca Lab and Prinz & Co, in collaboration with the Tourism Ministry, GNTO, Marketing Greece and Google.