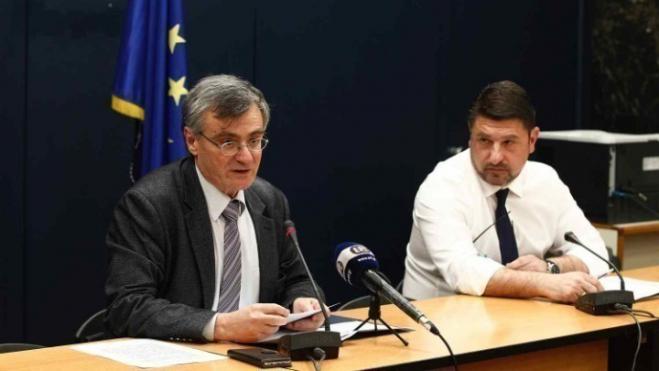 The Health Ministry’s coronavirus spokesman and infectious diseases professor Sotiris Tsiodras on Thursday evening dispelled speculative reports that the country's elderly will be allowed to leave their homes sometime soon.

Speaking at the daily televised briefing on the latest coronavirus facts and figures, he added that as the elderly are a high-risk group and very vulnerable to the novel coronavirus, allowing them to roam freely "will not happen before we have an effective vaccine, low virus dispersion and almost no imported cases of the virus in our country."

Schools
Concerning schools, he noted that when these open "the distance among students and all hygiene measures should be observed," even though, as he said, children are not considered a vulnerable group.
On upcoming coronavirus mass tests, he said that these concern "first and foremost" doctors and nurses but also those who come in contact with vulnerable groups. He added that enclosed facilities like refugee hotspots, prisons and other similar places where the virus can spread easily and rapidly, will also be prioritized for testing.

Thursday stats
The professor also announced 15 new confirmed cases of Covid-19 in Greece in the last 24 hours, and 3 new deaths.
The Covid-19 infections total in Greece stands at 2,207, of whom 569 were infected abroad and 921 in Greece.
Deaths total 105 since the start of the outbreak, of whom 29 were women. Of the 105, the majority had underlying health issues and their average age was over 70 years old.
Some 69 patients are being treated in Intensive Care Units. The average age of these patients is 68 years, and 13 of these are women. An 83 pct of ICU patients have underlying health issues or are at least 70 years of age.
A total of 33 people have so far been discharged from ICUs.

The government has doubled fines and included removal or car plates for anyone who travels without reason for Greek Orthodox Easter, Civil Protection Deputy Minister for Crisis Management Nikos Hardalias said on Thursday.
During the daily briefing on coronavirus developments, Hardalias spoke extensively of the great majority of Greek citizens who have observed faithfully the lockdown restrictions, and explained the introduction of additional ones, particularly for Easter. As he said, "One in ten Greeks has said directly or explicitly that they will not follow directions. They do not want to change their habits for one day, as if nothing is going on."
The stricter controls will go into effect at 21:00 on Holy Saturday (April 18) to midnight on Easter Monday, throughout Greece, and will incur a fine of 300 euros, from 150 euros so far, and their car plates will be removed temporarily. The only exception is for people assisting others, but limited to the driver and one passenger. For any violation of the rule, fines are 300 euros for the driver, 150 euros for every passenger, and removal of car plates temporarily.
"We cannot have the effort undertaken by the vast majority of the Greek people be undermined by few," Hardalias said, especially when it comes to endangering older people's health.

Continuing tests
Hardalias also referred a new phenomenon, of older people who have crowded at accountants' offices for the annual income tax filing. He reminded older people that they can speak with their accountants by phone because the procedure has moved online anyway, and told them they have nothing to worry about in terms of deadlines because it is June 30.
Among other things, he also said that passengers flying into Greece were tested for the virus and of 28 people deplaning in Greece only one was found positive to the virus. All are obliged to keep a 14-day quarantine, as the coronavirus-related measures in Greece dictate.
In addition, he said that the contact tracing in the region of Thessaly, where a coronavirus outbreak was traced to a Roma camp near Larissa currently under lockdown, is near completion. Of a total of 416 sample testings in the greater Thessaly region, only one case was positive to the virus, he said. Tests came from residents of areas near Larissa, Tyrnavos, Farsala, Trikala, and others like Volos, he said.

The next live TV briefing on the developments of the coronavirus pandemic in Greece will take place on Easter Monday, April 20, authorities said on Thursday.
On Good Friday, Saturday and Easter Sunday (April 19), the updates will be provided by written statements.