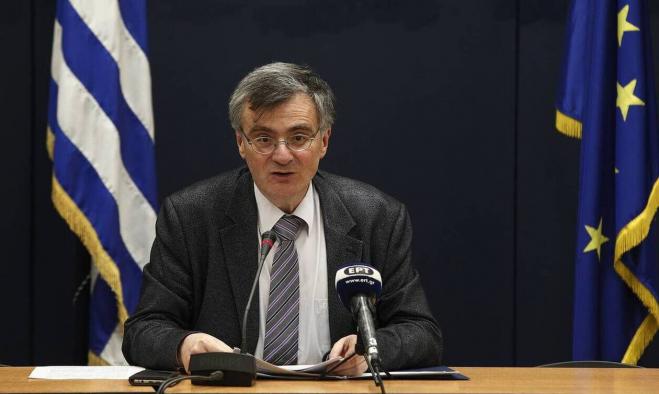 The Health Ministry's spokesman on novel coronavirus, Sotiris Tsiodras, expressed hope on Tuesday that the restrictive measures introduced to stem the pandemic may soon relaxed, if only gradually.

"The curve of seriously hospitalized people is dropping, the P0 factor is significantly lower than 1, and this gives us space to relax the measures in a gradual and cautious way," the infectious diseases professor said, citing the statistics factor used indicatively in virology. He warned that "we do not want the pandemic to revive in our country, following such a successful development," and he thanked the public, calling it once again a collaborative effort to fight the disease.
Tsiodras did the daily briefing on Tuesday without Civil Protection Deputy Minister for Crisis Management Nikos Hardalias, who is in the Kranidi town of the Argolid to handle a breakout of the virus at a hotel hosting refugees that has been under lockdown since last Thursday.

Tuesday stats
During the briefing, Tsiodras said there were 156 new confirmed coronavirus cases in Greece in the last 24 hours, of which 150 were at the Kranidi hotel (148 refugees and 2 administrative staff).
The total of cases since the outbreak in Greece is 2,401, of whom 56 pct are men. Of all cases, 572 were infected abroad, and 1,111 by people in Greece.
Patients at intensive care units (ICUs) total 59, at an average age of 67 years, and with 16 of them being women.
In addition, he announced 3 more deaths in the last 24 hours, bringing the total of coronavirus deaths in Greece to 121. Of these, 32 were women and most had underlying diseases and were 70 years old or older.
So far since the outbreak in Greece, 46 people have been discharged from ICUs, while authorities have completed a total of 55,466 sample tests.

Younger victims
Tsiodras spoke extensively about the cases of younger people succumbing to Covid-19 without known underlying issues. Citing the case of a 35-year-old Greek who died, the doctor said that although some cases related to postmortem diagnoses of underlying causes, it was often unknown what led to their deaths. He said it was unprecedented in Greece to have healthy young people deteriorate so fast, but some who have low oxygen levels and can function normally with some breathing difficulties may reach the final stage of pulmonary failure fast.

Air conditioning
Responding to another question about whether air conditioning machines spread the virus, he said data is not conclusive yet, but he would recommend to open the windows instead, especially if someone in the house has already been confirmed positive to the virus.
Speaking of the anxiety caused by Covid-19, Tsiodras also reminded the public that over 60 pct of those admitted to hospitals have been discharged. He said the concern of this virus, compared to the influenza virus, was that in one month, the coronavirus spread as much as influenza had in three months (among vaccinated population), and that was an indication of "how fast and aggressively it enters society".

Contact tracing for the 150 cases of coronavirus infection found at a hotel housing refugees in Kranidi, the Argolid area of the Peloponnese, is nearly complete, Civil Protection Deputy Minister for Crisis Management Nikos Hardalias said on Tuesday.
Speaking from the region, where he will remain until Wednesday, the minister reassured the public that "everything is under control" and that the hotel that which has been in lockdown since Thursday of Easter Week, will be supplied with food and other necessities by local services.
A total of 497 samples were taken in the Kranidi area, he said, of which 150 tested positive to the virus. Two belong to administrative members (international organizations) at the facility. All positive cases exhibit no symptoms of Covid-19 disease, Hardalias said, while the rest of the area is under curfew from evening to the next morning, daily for the next 14 days. No open-air markets will be allowed during this time, he said.

Health Center
The Kranidi Health Center will see the addition of 6 doctors and 4 nursing staff, while a paramedic ambulance (EKAV) will be stationed in the area every day during the entire two-week period, for emergencies.
"By evening, we will have completed all checks necessary for preventative reasons among workers in the wider area that could have come in contact directly or indirectly with refugees at the hotel before Good Thursday," April 16," when the hotel was placed in lockdown.
Hardalias appealed to members of vulnerable groups to stay home and reiterated "there is no reason to panic; we must all remain calm and clear-headed and follow directions."
Peloponnese Regional Director Panagiotis Nikas said he was "much more optimistic than when I first arrived," and welcomed the state's fast response, adding that his region will contribute in any way possible.

The villages of Zoumbouli and Arnaouti at Xanthi region's Miki municipality, NE Greece, were ordered to go on lockdown on Tuesday evening by Deputy Minister of Civil Protection and Crisis Management Nikos Hardalias.
Residents will remain isolated inside their homes from April 21 at 20:00 until May 4 at 20:00, following the detection of multiple Covid-19 infections at the two villages. The news was also announced at the daily briefing by professor Soritis Tsiodras.
The regional authorities will ensure the supply of necessary goods to residents and the continuation of farming work.