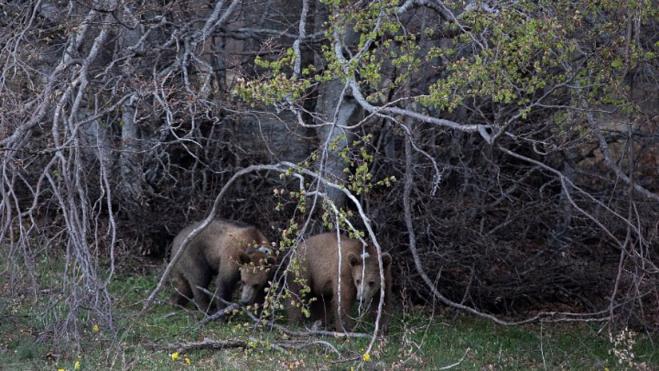 Bradley and Cooper, the two young bears received as malnourished babies by "Arcturus" about 12 months ago from a sheepfold in Oinoi, Kozani, came out of their cage hesitantly and looked around, looking back at their cage.

After they gained strength and were taught by their caretakers the secrets of survival, it's time to return home, with Bradley now weighing 80 kilos and Cooper 67!

Early on Saturday morning, the process for the smooth reintegration of Bradley and Cooper, names given to them by "Arcturus" for their undeniable, wild beauty, was set up in Agrapidies, Florina.

The animals were drugged with the help of the veterinarian Nikos Patsinakidis and the scientific director of "Arcturos" Dr. Alexandrou Karamanlidis, they gradually prepared for their return to nature, having now reached the age of 15 months. All the necessary tests were performed, a DNA sample was taken, measurements and microchips were placed and, finally, a special collar-transmitter was placed on them.

Also present throughout the long process was the founder and president of the organization, Giannis Boutaris, who attended, for the first time up close, the necessary actions for the reintegration of bears into the wild. "We have now received the relevant permits to expand the shelter in Nymphaeum in order to transport the other bears there, which will not be able to be reintegrated," Mr. Boutaris told APE-MPE, while expressing his dissatisfaction with the fact that "never  was there state support with funding for the work of "Arcturus", which is left only to the tickets of the visitors, to the sales of the souvenirs and to the offers and donations of individuals and companies ".

Far from bureaucratic entanglements, the bears were transported drugged in a cage on the body of a truck and a small group of "Arcturus" released them at one point in the forest. Alexandros Karamanlidis opened the cage, the bears emerged and jumped to freedom, but remained in the area for a while, rather puzzled by their new environment, before finally disappearing into the forest.

The collars that were placed on them convey their location and so the Scientific Team of "Arcturus" can monitor them throughout the 24 hours. In fact, the first signs of the two bears' movements are encouraging. They separated immediately and each followed its own path. Bradley covered a considerable distance, but Cooper did not move far, but he is still in a wooded area. Yesterday afternoon he passed outside the settlement of Drosopigi, Florina, however, he quickly moved away again to the forest.

The movements of the two bears are closely monitored, especially in the first critical days after the reintegration, and the Emergency Response Team is on alert to intervene in case they move too close or in settlements.