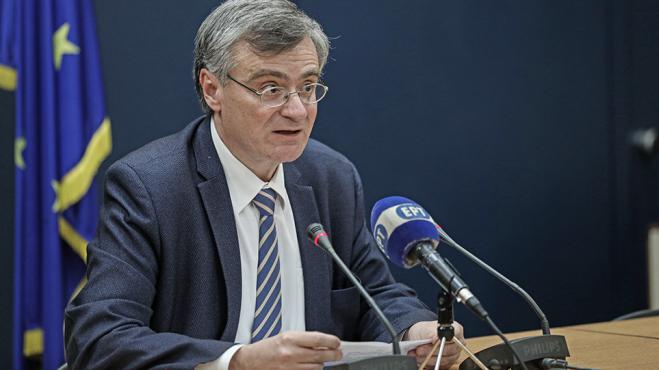 Ahead of what is expected to be one of the warmest May weekends of recent years, Tsiodras pointed up that "direct sun exposure and temperatures above 25 degrees Celsius have no preventative effect against the novel coronavirus."

He then underlined quite strongly that the virus "has not disappeared," and urged people to show a calm and responsible public attitude when at the beach and also practice diligent social distancing there.

Referring to the Roma settlement in Nea Smirni, Larissa, to refugee hotspots, to prisons and to elderly care facilities, he stressed that it takes some 35 days of strict measures to be able to contain a limited outbreak in small communities or accommodation structures of up to 1,000 people, in order to "bring the R0 indicator down to below 0,5."

The infections expert then said that he is rather concerned about potential "multiple outbreaks in many places at the same time, which will once again test the adequacy of the health system, the lifting of measures, and the ability to return to partial normalcy."

The professor also announced another 40 new coronavirus cases officially recorded in Greece in the last 24 hours and 4 deaths, bringing the total of infections since the start of the outbreak in the country to 2,810.

The 40 new cases include the 35 infections at the Roma settlement in Nea Smirni, near Larissa.

So far, of the total infections, 612 are traced to travel abroad and 1,452 to known cases in Greece.

Twenty-three hospitalized Greeks are intubated. Their average age is 72 years old and 10 of them are women. Nearly all (96 pct) have an underlying illness or are over 70 years of age. Another 90 have been discharged from ICUs since the start of the outbreak.

Fatalities since the beginning of the outbreak total 160, with 43 of them being women. The average age of the deceased was 75 years and 94 pct had some underlying illness and/or were 70 years of age or more.

A total of 120,015 diagnostic tests for Covid-19 have so far been carried out in Greece.

Civil Protection Deputy Minister for Crisis Management Nikos Hardalias on Friday reviewed the measures in place for the opening of sea travel, as of Monday, and the lifting of Covid-19 restrictions in travel on mainland Greece, to Crete and to Evia.

Measures to ensure coastal shipping operates safely for passengers and crew will be in effect to June 15, he noted, when they will be reevaluated. Details first announced earlier in the day by the Shipping Ministry relate to the number of passengers and social distancing, sleeping in cabins, obligatory wearing of masks by crew and passengers, the circulation of air on board, handling possible infections, and the special training of crew members.

Hardalias reiterated the restrictions of flights to certain countries and back and the ban on non-EU citizens from travelling to Greece, while he added that a committee of specialists is examining measures for land and air travel.

Referring to the New Smyrni, near Larissa, community where 35 Roma tested positive of 637 total samples, he said the area was placed on curfew while those infected were moved to a rehabilitation center and their contacts were being traced. The curfew in the community will be in effect for 14 days, from 22:00 to 06:00 daily.

All residents are obliged to wear a mask and to avoid gatherings of over 10 people, while itinerant merchants and those working in open-air markets will be able to leave for work as long as they have two sequential negative tests, repeated every five days. The prefecture of Thessaly will distribute 1,500 cloth masks to all families, as well as antiseptic.

The mobile units of the public health system taking random samples will also test those who were absent from the community in recent days, and trace infected people, Hardalias added.
The minister said that there were reactions to the measures on Friday, but "these measures aim at protecting the local community," and safeguarding public health remained a top priority.

Asked to comment on the Omonia crowding when the new fountain went into operation, by the Athens municipality, Hardalias said that the gathering "was obviously a mistake" and should have been avoided. He said, however, that the mayor had apologized publicly for his mistake.