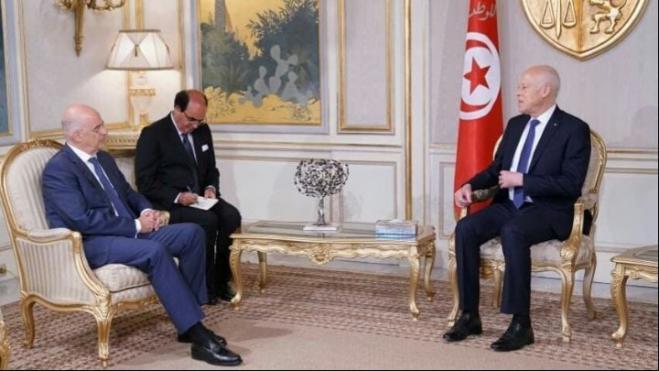 Dendias conveyed an invitation to Saied by Greek President Katerina Sakellaropoulou to visit Athens. He also expressed appreciation for Tunisia's stance on Libya that calls for a solution to the conflict by the Libyan people, without foreign powers and intervention.

Foreign Affairs Minister Nikos Dendias pointed out that the solution to the Libyan crisis lies with Libyans, "without external intervention or foreign armies," speaking in joint statements with his Tunisian counterpart Noureddine Erray after their meeting in Tunis on Monday.

"Tunisia can play a rather constructive role towards this solution," he said, stressing that Greece is ready to help Tunisia in its relations with the European Union, as the latter supports its efforts to meet economic and development challenges. Greece also "recognizes the constructive and stabilizing role Tunisia plays in the region," Dendias added.

The Greek minister emphasized that both countries are committed to carrying out their foreign policy within International Law, "the polar opposite to Turkey's involvement in Libya, which directly contradicts UN resolutions and the Berlin Conference conclusions." This leads to the destabilization of the region, he stressed.

The two ministers also signed a maritime transport agreement, which opens "new bonds of cooperation in a key area," Dendias highlighted, before congratulating Erray on his country's successful handling of the coronavirus pandemic.

On his party, Erray said the situation in Libya is not easy, but a solution to the conflict must be found on the basis of international law and the will of its people, because instability there carries serious repercussions.

Erray called on all sides in Libya to reach a domestic political solution, while he stressed that Tunisia rejects any external or military intervention in the country. On its part, its neighbor Tunisia will work towards a political solution as a non-permanent member of the UN Security Council, he noted.

He and Dendias called on Mediterranean organizations to help the region as one of stability and joint prosperity, while Dendias said Greece could contribute as a friendly, democratic country that is an EU member.

The meeting focused on furthering relations, the Tunisian minister said, particularly in the economic sector, and within the European-Mediterranean region. The agreement signed on maritime transport related to stronger bilateral economic and trade relations, he said.