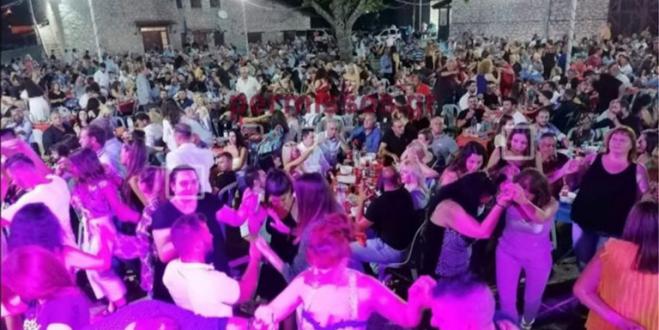 A large crowd, without observing the necessary measures, gathered in Aliartos, for a party (panigyri) organized in the middle of the coronavirus pandemic, in the presence of MPs, but also of the mayor of Livadia.

The event was organized by the Ypsilantis Sports Club in Aliartos Square, last Saturday with the popular singer Giota Griva as a guest. As can be seen from the photos on the permissos.gr website, the crowd was large, which caused an alarm in the country's health authorities, who have repeatedly warned that such phenomena could "ruin" the country's efforts so far.

In fact, early in the morning, Professor of Microbiology, Alkiviadis Vatopoulos, speaking to SKAI, raised the issue of banning such festivals.

What is very impressive, however, is that present at the party were several representatives of the municipal authority, the Greek Parliament, but also doctors. Specifically, New Democracy MP Andreas Koutsoumbas, SYRIZA MP Giota Poulou and Livadia Mayor Ioannis Tagalegas attended.

Attendees did not observe any protection measures

Naturally, the social media were afire, as users, MPs and mayors should be setting a good example.

It is noted that the party was scheduled for December 2019, however, the fear of transmitting the new coronavirus had led the organizers of AO Ypsilantis to the decision to postpone it in order to carry it out when the conditions would allow it.