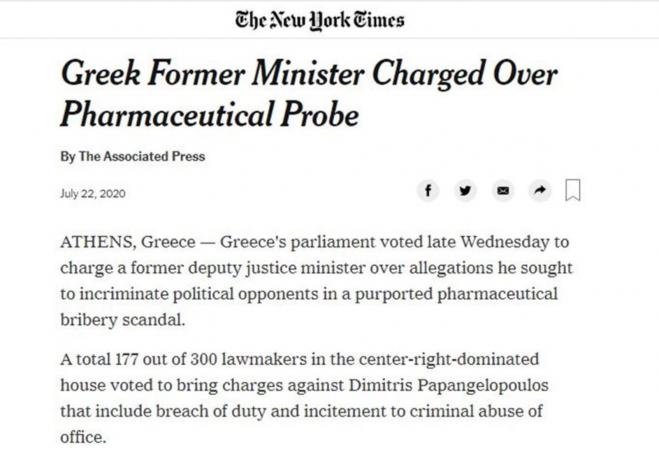 The revelations that have been coming to light lately about the SYRIZA government are a topic in the international media. In fact, France 24 and the New York Times, respectively, refer to the recent revelations about the attempt to cover up the Mati fire and the Novartis conspiracy.

The France24 network hosts an extensive tribute to the anniversary of the two years since the fire in Mati, in which it makes extensive references to the shocking revelations of expert fire investigator Dimitris Liotsios about the operations of the Fire Brigade, while it is pointed out -among other things- that at that time "The left-wing government of then-Prime Minister Alexis Tsipras had stressed the difficulty of organizing an evacuation in the coastal community."

In addition, "after the disaster, the police and fire services gave contradictory statements about what went wrong," the France24 report said, focusing on the "attempt to cover up" any responsibility.

The New York Times also makes an extensive report, regarding the referral to Justice of the former Deputy Minister of Justice, Dimitris Papagelopoulos, after the completion of the work of the pre-investigation committee of the Greek Parliament, late yesterday evening.

Under the headline "Greek former minister charged over pharmaceutical probe", the newspaper goes back to 2018, when the left-wing government in which Papagelopoulos served was in power, parliament ordered an investigation into 10 senior opposition officials, including a former Conservative Prime Minister and the current Governor of the Central Bank of Greece ".

"The subsequent investigation found insufficient evidence to support their indictment," the New York Times reported, concluding - after that - that "the Greek parliament voted late Wednesday to accuse a former deputy justice minister of allegations he made. to incriminate political opponents in an alleged bribery scandal. "

With the main opposition party "re-establishing itself" in the international audience through the actions of its government, "the past overtakes the former Prime Minister of Greece, Tsipras", a Redaktions Netzwerk Deutschland article reads, describing that it is low in the polls "and now" new revelations bring the former head of government in a situation where he has to give explanations".

In fact, "the new revelations could leave the already affected opposition even farther behind", the article points out and cites the findings of a recent poll, which shows SYRIZA getting "only" 20.4% against 41.6% of the ruling New Democrac party, which since the last elections has expanded its lead from 8 percentage points to 21.2.