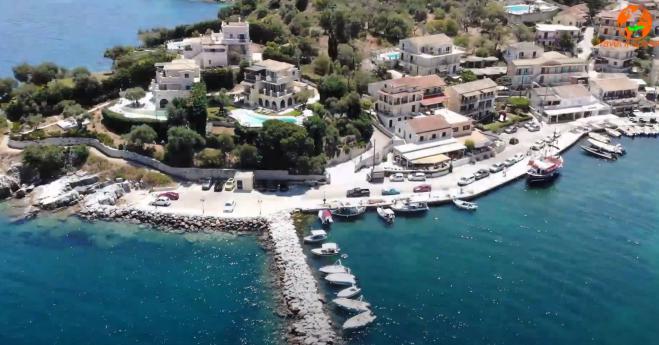 On the northeastern side of Corfu there is a former traditional fishing village that goes by the name of Kassiopi and that over time has evolved into a popular and busy tourist resort of the island. Marinos Charalampopoulos takes us on a virtual tour.

Its picturesque harbor has retained its old prestige with the intense flavor of fishing, in a modern era where tourist shops, bars, cafes and restaurants make their appearance around it, offering their services to the various tourists. flooding the place. As for its beaches, rocky and quite small with pebbles and crystal clear blue waters, they seem hidden around the cape, in places that are literally isolated and invisible to the naked eye, such as Bataria, Kanoni and Kalamionas.

Kassiopi is built on the ancient city, while in antiquity it was "inhabited" both by Nero, who is said to have watched a play in the theater of the time, and by Anthony and Cleopatra, who stayed in Kassiopi shortly before from the naval battle of Aktio, where they suffered a catastrophic defeat.

But Kassiopi seems to have played a very important role in the history of the island, mainly due to its geographical location on the sea passage between Corfu and Albania, which can be seen today from the impressive ruins of the Byzantine castle overlooking the port.

The fortification of the port, in the 13th century, led again to the construction of the castle by the particularly hard Angevin rulers of Corfu (1267-1386), with intermediate observatories, so that the exchange of messages could take place quickly. But the fortress was destroyed by the Venetians, who built a newer one of their own on the hill. In fact, the castle of Kassiopi was considered one of the three strongest castles on the island, being a very important defensive triangle, and together with it in Gardiki in the south of Corfu and Angelokastro in the northwest, ensured the defense of the island before the Venetian period.

In ancient times, in Kassiopi there was also a sanctuary of Zeus, where the local church of Panagia Kassopitra was built in the 16th century and is celebrated by the locals on August 15, with a festival at the port, food and traditional Corfiot songs. and dances.