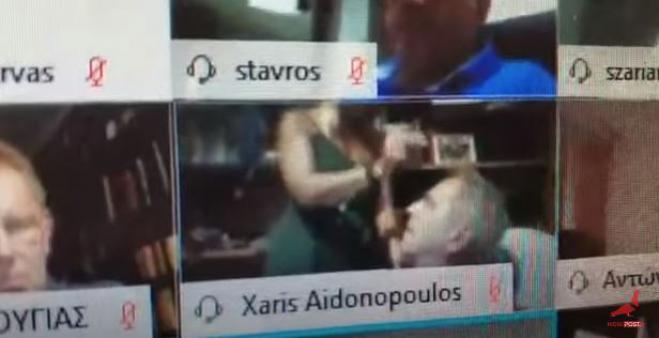 Whjen you thought you had seen it all, you haven't seen the evil eye being cast away through the process of xematiasma and even live at a municipal council meeting.

The truly incredible incident occurred yesterday, during the teleconference of the municipal council of Thessaloniki.

As it turns out in the video published by parallaximag.gr, the deputy mayor of Thessaloniki, Haris Aidonopoulos, obviously felt unwell. So, a lady hurries to ... perform the xematiasma so he can feel better.

Things, however, did not stop there during the… odd municipal council meeting. According to makthes.gr, the deputy mayor for Social Policy, Haris Aidonopoulos and a urologist by profession, received a question from three municipal councilors on an issue within his competence. After appearing in the video conference window with some delay, he was looking, obviously surprised, trying to turn on his microphone.

When he succeeded, he confessed to the chairman of the Board. and the rest, that they had "caught" him during a patient examination. So the deputy mayor/urologist asked to delay the matter for later, in order to complete the examination.

So Mr. Tsavlis, also a doctor (pulmonologist), took urologist Ch. Aidonopoulos out of the difficult position, telling him "I will let you finish the examination because I imagine the position in which you have left the patient in".

This made most people laugh, while others showed that they could not believe the surreal event. In fact, the municipal councilor, Glykeria Kalfakakou voiced her own troubles saying that she also had a concern about the food she had on the stove.