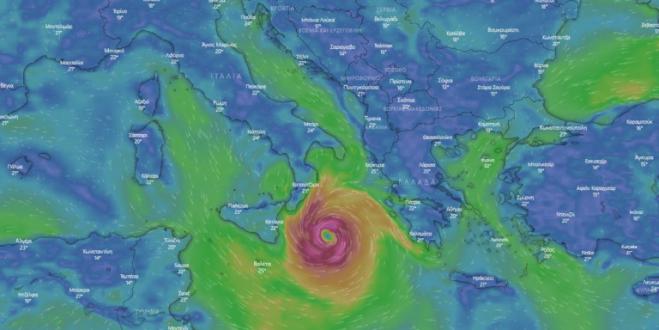 On Thursday afternoon, the severe weather front "Ianos" (Janus) is expected to appear, which will hit western, southern and central Greece until Saturday at noon.

The Mediterranean Cyclone (or medicane, as it is called) is already in the Central Mediterranean and yesterday affected the southern part of Italy, with rain levels approaching 600 mm.

From today until Saturday, it is expected to hit Greece as well, with the state mechanism warning the citizens about very extreme weather phenomena. Characteristically, very strong thunderstorms are expected, a large volume of rain, but also stormy winds that will reach up to 11 Beaufort, as meteorologist G. Kallianos mentioned yesterday!

According to meteo.gr, the main characteristics of "Ianos" will be the heavy rainfall, especially in the Ionian and the southern mainland parts of the country, the thunderstorms in places and the very stormy winds, especially in sea parts, where they may reach storm levels.

The Mediterranean Cyclone is expected to make its first appearance in the Ionian Islands and the Western Peloponnese. In fact, as Mr. Hardalias said, the effects will be "strong and long lasting".

The areas that "Ianos" is expected to hit first are:

Then the bad weather is expected to move east and hit the following prefectures on Friday:

On Saturday there is a possibility that the phenomena will hit Crete and the Cyclades, but until last night the meteorologists were cautious, as the Mediterranean Cyclone continued to swirl, but there were deviations in its movement to the east.

The Deputy Minister for Civil Protection gave important instructions to the citizens of these areas, in order to avoid any unpleasant problems. After calling them to be vigilant, he asked them to emphasize the following: