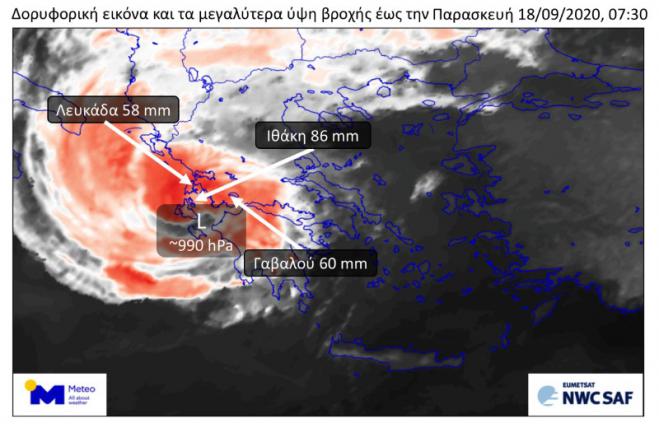 The onset of severe weather front "Ianos" coming from the western parts of the country is in full swing.

The night was particularly difficult especially for the residents of Cephalonia, Ithaca and Zakynthos, as the pounding of bad weather caused floods, power outages and tree falls.

According to the National Observatory of Athens / meteo.gr, which yesterday presented the scenaan rios for the course of the bad weather, during the night but also this morning, the Mediterranean Cyclone "Ianos" moved towards our country, " with its center showing an "eye", ie the absence of clouds in an area of ​​about 50 km where the winds are blowing in its periphery and apnea prevails in its center ".

Hardalias after the meeting: Which areas will be hit by the bad weather

Deputy minister for Civil Protection Nikos Hardalias described the next 9 hours as critical, while referring to the areas that are threatened.

"The cyclone will remain in the west with the same force for 6 to 9 hours and then it will start weakening moving south and continuing to affect the western regions of the Peloponnese," he said in a statement. At the same time, the Deputy Minister for Civil Protection underlined that the next hours are critical, while intense weather phenomena and heavy rainfall expected.

"A part of the mass is moving northeast and in combination with the meltemia (summer winds) it will encounter, it will create intense local storms in areas of Central Greece from noon and afternoon," he said.

The new front, which will be directed southeast, as noted by Mr. Hardalias, will affect Southern Thessaly and Central Greece, with storms and rain, while most likely will affect Fokida and Northern Evia, which from the afternoon are expected to receive large quantities water. From late Friday night to Saturday, according to the deputy minister, Attica and Corinth will be affected by the phenomena of bad weather.

Rainfall and storms in most parts of the country are brought today by the bad weather "Ianos" / METEOALARM.EU

The team of meteo.gr then reported that satellite estimates of wind intensity showed an average wind intensity of 90 km / h west of Kefalonia and Zakynthos, shortly before "Ianos" moved to the strait between these two islands after 04:00 Of Greece.

During this movement, the greatest wind intensities hit Ithaca, Kefalonia, Zakynthos and Western Achaia with gusts that exceeded 80 km / h. Floods due to heavy rainfall and rising sea levels, as well as tree falls are reported in many areas.

"The map shows the satellite image we received and edited at the National Observatory of Athens / meteo.gr on Friday morning 18/09 at 07:30 Greek time and shows the center of IANOS a few kilometers north of Zakynthos with the minimum atmospheric pressure in the middle sea ​​level being estimated at 990 hPa. The map also shows the highest rainfall levels that we record from the afternoon of Thursday 17/09, but due to extensive power outages many meteorological stations do not report newer values ​​from 04:00 "explains the team of the National Observatory of Athens.

The new trajectory of "Ianos"

According to the latest forecast data of the National Observatory of Athens / Meteo.gr, "Ianos", whose center early in the morning of Friday 18/09 is swirling in the Central Ionian, is expected to initially move to the Northwest Peloponnese and then turn south. The following video presents successive forecast maps of the cumulative rainfall of IANOS until the night of Saturday 19/09, indicating both the movement of the system and the areas that will be most affected (Ionian, Peloponnese, Central and Eastern Sterea, Southeastern Thessaly and milder in Attica). The risk of floods in the above areas is increased in the next 24 hours.

The predicted orbit that "Ianos" will follow and the concentrated rainfall levels of over 50 mm are presented in the map below. The dashed line in the orbit of IANOS after Saturday night indicates the relative uncertainty about its exact course: 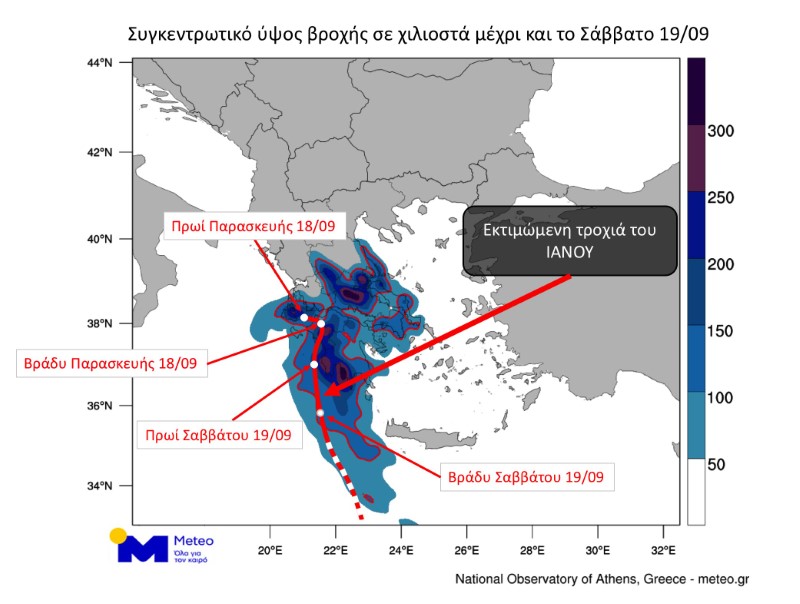