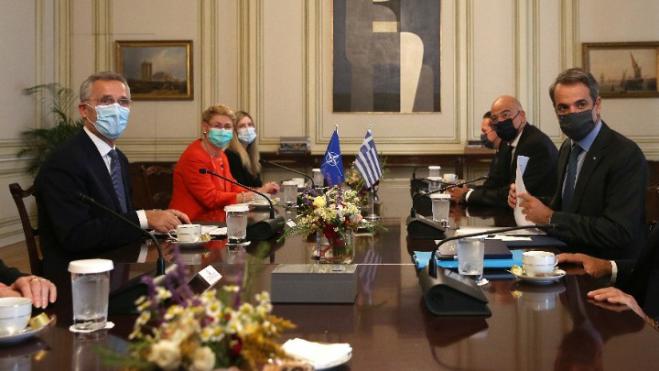 The meeting of the Greek Prime Minister Kyriakos Mitsotakis with NATO Secretary General Jens Stoltenberg has ended after whih they both made statements.

The main points of Mitsotakis' statements
"Obviously we discussed everything that has happened in recent months in the Eastern Mediterranean.Issues that threaten the peace, stability and cohesion of NATO itself," said Prime Minister Kyriakos Mitsotakis, beginning the joint statements with NATO Secretary General Jens Stoltenberg, after the end of the meeting they had at the Maximos Mansion.

"It's not a bilateral issue. It concerns all the partners of the North Atlantic pact and a challenge to Europe as a whole ", the prime minister continued and added. "This is a danger that lurks in the US as well."

"A typical example is the acquisition of S-400s by Turkey. Greece, as long as it remains faithful to its national laws, is constantly striving for a peaceful settlement of disputes. It is always ready for dialogue "continued Kyriakos Mitsotakis. "It is committed to abstaining from any threat or use of force as provided for in the Washington Founding Treaty. That is why our country welcomes a first step from Turkey towards de-escalation. It remains to be seen whether this is an honest move or a temporary maneuver. We expect consistency and continuity from our neighbors. We expect an immediate date for the start of exploratory contacts on the sole issue of the settlement of the zones in the Aegean and the Eastern Mediterranean ".

"I had the opportunity to inform [the general secretary] about the recent decisions on the reinforcement of the Armed Forces", the Prime Minister continued, adding that he informed the NATO Secretary General "About our decision to strengthen the Armed Forces with 15,000 specialized permanent staff".

Greece is one of the few countries that systematically during the crisis period spent more than 2% of its GDP on defense spending, said Mr. Mitsotakis, noting that a cornerstone of NATO is the principle of solidarity. The word alliance means together in battle. In this case together in the fight for Peace, Security, Cooperation.

Stoltenberg: NATO stands in solidarity with Greece
The de-escalation mechanism [in tension with Turkey] can help to make room for diplomatic efforts.

NATO stands in solidarity with Greece. The NATO mission in the Aegean supports the Greek needs, in cooperation with Frontex.

Stoltenberg's  meetings in Athens
NATO Secretary General Jens Stoltenberg is visiting Athens today in the wake of the recent agreement to establish a NATO crisis prevention mechanism between Greece and Turkey. In addition to the four-on-four meeting with the Prime Minister, Mr. Stoltenberg met with the Minister of Foreign Affairs Nikos Dendias and the Minister of National Defense Nikos Panagiotopoulos.

During the working breakfast, Mr. Dendias briefed Mr. Stoltenberg on the situation in the Eastern Mediterranean, the meditation process for the future of the Alliance, as well as other issues of mutual interest

At 12:00, the NATO Secretary General was received by the President of the Republic, Katerina Sakellaropoulou, at the Presidential Palace.

It is noted that the NATO Secretary General was in Turkey yesterday, where he had a meeting with President Tayyip Erdogan and Foreign Minister Melvut Cavusoglu. According to a post by Jens Stoltenberg, they discussed "the military deterrent mechanism developed by NATO for the Eastern Mediterranean".