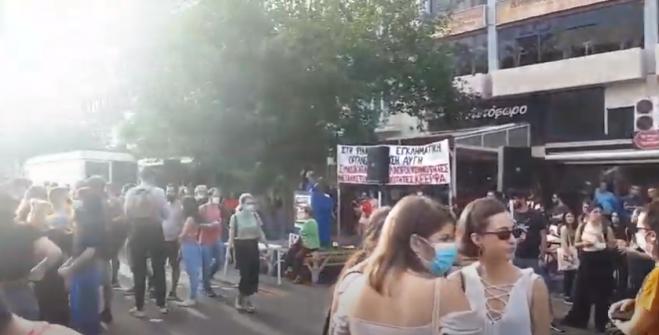 A historic decision of the Greek Justice was announced today (7 October), after the Golden Dawn party was convicted as a criminal organization.

The court earlier found Giorgos Roupakias guilty of the murder of Pavlos Fyssas, while 15 of the 17 accused were found guilty in the same case, ie all except Santorinios and Tsakanikas. All those accused of the attacks on PAME and the Egyptian fishermen were also found guilty.

The following were found guilty of the murder of Fyssa:

Regarding the attack on the members of PAME, the court turned the accusation into dangerous bodily injury and the the accused Kastrinos, Pantazis and Hatzidakis were found guilty, while for the rest the prosecution was for simple bodily injury ceases.

Tensions outside the court
At this historic moment, hooded individuals tried to tarnish the event by throwing Molotov cocktails, smoke bombs and various other objects at the police forces outside the Court of Appeals, with the police trying to repel them. For about 15 minutes there was tension, but it ffizlled out a little later.

While all of Greece was waiting for the court decision and the sentencing of Chrysi Avgi, members of the youth of SYRIZA and ANTARSIA came to blows and created incidents outside the Court of Appeal. Without the reason for the tension being known, young people from the two blocs came into conflict. Suddenly the blood burned and both sides came to grips. Fists, kicks and pushes between young people while everyone was waiting to learn the decision of the court for Golden Dawn. The calmer ones tried to stop them, but from time to time there were some skirmishes.

Shortly before 11 o'clock, the president of SYRIZA, Alexis Tsipras, arrived outside the Court of Appeals and stated: "The people are giving their verdict. They are not innocent. We know this very well, about their actions, about the murders, the violence, about the poisoning of Greek society with hatred and division. We hope that Justice will rise to the occasion and give this verdict as it should. In the consciousness of the Greek people, however, it is a criminal organization and it will go where it should, that is, in the garbage can of history, as befits the struggles of this people, the history of this place ".

Crowds of people on Alexandras Avenue were waiting for the decision for the Golden Dawn from early in the morning.

The slogan "They are not innocent everywhere" was also present in the masks of those gathered, as well as the slogan "The Nazis in prison". And of course there were banners for Pavlos Fyssas

"Justice, only, Justice", were the three words that Pavlos Fyssas's mother said to the journalists who approached her while she was coming to court.
Fofi Gennimata, the leader of KINAL/PASOK was also outside the Court of Appeal.

A ND delegation was also present at the Court of Appeals, consisting of the secretary of the Political Committee of New Democracy George Stergiou, the general director of the party Giannis Bratakos, spokesman Tassos Gaitanis and the head of ONED Pavlos Marinakis. "New Democracy has blocked the way for nostalgic fascists and racists. It was everywhere in front of them, both in society and in Parliament. It canceled their plans in practice, putting them on the sidelines, where they really belong ", the secretary of the Political Committee of ND, George Stergiou pointed out,