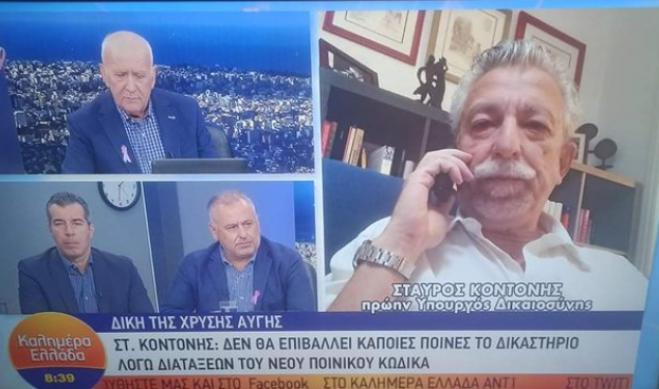 In its announcement, SYRIZA claims that Kontonis has placed himself out of the party with what it said about the Penal Code under Tsipras, which - as the former minister warned - would pave the way for softer sentences for the Golden Dawn cadres.

What is surprising is that in SYRIZA they disagree with Stavros Kontonis and delete him but at the same time they tabled an amendment that completely agrees with what Kontonis said!

The announcement of SYRIZA

"Stavros Kontonis remains unwavering, according to his statement, 'a communist on the renewing Left.' Obviously no one can take away that right.

However, he resigned the right to be a member of the SYRIZA-Progressive Alliance from the moment he decided to turn against his party, not only with non-existent accusations about the penal code that in fact favor the propaganda and fake news of ND, but and with unacceptable, slanderous descriptions of his comrades. He chose with his attitude to try to tarnish a huge popular victory against the criminal activity of the neo-Nazis.
Everyone makes his choices ".

Kontonis: "They are miserable, slanderous and liars"

A little earlier, Mr. Kontonis, after the scorching announcement in which he called SYRIZA a "monument of slander and Stalinism", had insisted on his characterizations, speaking in the main news bulletin of OPEN.

"After 41 years on the Left, they say I am becoming the 5th column of the Right. They are miserable, slanderous and liars ", he stated characteristically, responding again to the announcement of SYRIZA, through which the party accused him of" adopting the fake news of ND "and that" his statements are unacceptable and objectively serve political interests hostile to the Left and SYRIZA ".

Mr. Kontonis, among other things, stated that he had warned about the new Penal Code that some changes "would throw let Golden Dawn off softly".

The former Minister of Justice stressed: "I, when I was a minister, said that under these circumstances we can not go with this Penal Code. Unless specific articles are changed, the government cannot take political responsibility. "I have spoken about the transformation of the crime of bribery, about the deprivation of civil rights, about the issues of rape, as well as about torture."

"What New Democracy propagated, that I allegedly resigned on this issue, is completely false. "I have been in politics for decades, I have been a communist in the Renewing Left for 41 years and I remain steadfast there," Stavros Kontonis also said.