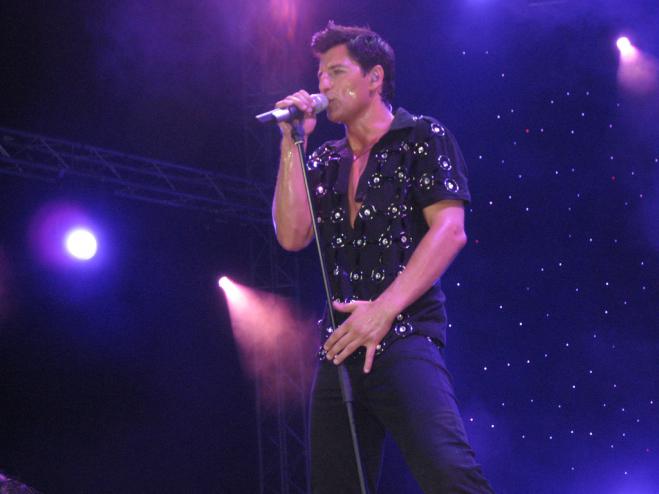 After the out-of-court writ sent by the well-known singer to the SYRIZA MP,  Pavlos Polakis not only did not take back his statement with which he includes Rouvas among the "friends" of the Golden Dawn but with a post on Instagram he continued the attack.

"I was really surprised to be informed yesterday, 7.10.2020, of your statements, which took place during the meeting of the Committee on Public Administration, Order and Justice of the Greek Parliament, on 6.10.2020, regarding the long-awaited court decision for its trial. Golden Dawn, during which you mentioned a number of artists by name, including me, claiming more or less that I allegedly provided "whitewashing" to the Golden Dawn and contributed to the Golden Dawn legitimization in the consciousness of the world. In fact, in support of your allegations, you referred to my statements on the show ALL by Themos Anastasiadis, in the year 2012, and in your familiar style, you wondered in which hole I am now looking to hide in view of the issuance of the decision.

A simple reading of my statements, which you relied on, is enough for any intelligent person to realize that I did not provide any support to Golden Dawn, since both my democratic views and my absolute commitment to the democratic institutions of our State are known, but also my unequivocal and my categorical opposition to any kind of violence and its devotees, wherever they come from. And it was absolutely obvious from my statements that Golden Dawn did not frighten me and does not frighten me, not because I support it, but because, in my opinion, we should not stand in fear of such formations, since only in this way can they to be dealt with effectively.

As I said then in the show of Themos Anastasiadis, the rise of Golden Dawn was a consequence of the economic crisis that our country was experiencing then and history will show, as it showed its course. After its non-election to the Greek Parliament in 2019, I sincerely wish the court decision that was issued just yesterday will mark the end of this organization.

Despite the fact that the style and meaning of what I said were absolutely clear, you, populist and motivated by passion and obvious revenge against me, which I guess is due to my public stance in favor of "Yes" in the 2015 referendum, but also in order to gain, through my own recognition the attention that every reference to my name attracts, publicity for the benefit of your political person and hiding behind the immunity that your position as an MP provides you, you "put me in a sack with all else'', in an immoral way, collectively with other artists and their own - completely different style and content in relation to my own - you distorted my words vulgarly and in an obvious populist mood in order to create your own narrative about my person and my course and finally you connected me with the Nazi formation of the Golden Dawn, affecting my personality and name, not only as an artist but mainly as a person and a citizen with deep democratic beliefs.

With your statements, you really exceeded all legitimate limits. It would not be an exaggeration to say that your own actions - and not my own - test the democratic principles of our country. Already in this letter, I strongly protest against your above-mentioned illegal, malicious, immoral, and offensive behavior, about your above all false and slanderous statements, which have even been reproduced by a number of media, about your attempt to identify me with Nazi perceptions of the Golden Dawn but also with artists who may embrace its ideals and I declare to you that your actions have caused me enormous moral damage.

Therefore, I CALL ON YOU, hereby, to redress the insult against me and to immediately recall all the offensive, false, and slanderous things you have said about me. Needless to say, in any other case I will exercise all my rights to defend my honor and reputation, in accordance with the provisions in force ".

Polakis' answer
Polakis, however, as soon as he was informed about the out-of-court writ, not only was he not intimidated, but he also posted on his personal Facebook account, with statements by the artists who supported or he considers supported the Golden Dawn. In fact, he posted a photo of the artist's profile on social media (which was republished by a website) and where it seems that one of those who he follows on social media pages is Elias Kasidiaris.

"The well-known pop idol Sakis Rouvas recently sent me an Out-of-Court (photo 1) writ with which he protests because the day before yesterday in the Public Administration Committee of the Parliament I mentioned that some artists with their statements (including him) contributed to legitimizing in his conscience the neo-Nazi, fascist and criminal formation of the Golden Dawn. So I mentioned about Rouvas that in 2012 on a show by Th. Anastasiadis, when asked by a journalist if he was intimidated by the entrance of the Golden Dawn in Parliament, he had stated verbatim: "No, it did not scare me at all ( "It did not frighten me at all. I think it's a consequence of everything that is happening. It did not frighten me. Why should it frighten me? I am not frightened by the decision that people make. video at link to Pontiki and photo 2)

It bothered him that I reminded him of the above. Of course, he was not bothered accordingly when various sites included him in the "famous friends of Golden Dawn" when the Nazis were on top (photo 3-4).

In any case, I will welcome the even delayed and late conviction of Golden Dawn by Mr. Rouvas when I make sure that he has not forgotten to DELETE himself from the followers of the Golden Dawn chief Elias Kasidiaris !! (photo 5)

PS: The well-known "memory washers" hurried to rinse the above statement of the well-known artist, immediately publishing his current out-of-court writ (photo 6-7). Mr. Rouvas probably wants to be a candidate with ND and they are preparing a warm welcome for him !!!