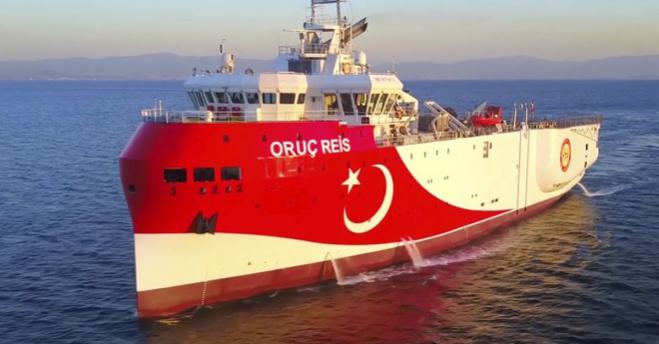 New developments in Greek-Turkish relations are being provoked by Ankara's new illegal Navtex near Kastellorizo, with the Greek Foreign Ministry speaking in a statement about a major escalation and a direct threat.

Turkey has issued a NAVTEX for research vessel Oruc Reis just off the territorial waters of Kastellorizo.

The announcement in detail:

The new illegal Turkish Navtex for illegal surveys south of Kastelorizo ​​on the Greek continental shelf, at a distance of only 6.5 nm. from the Greek coast, is a major escalation and a direct threat to peace and security in the region.

Just a few days after the meeting of the Foreign Ministers of Greece and Turkey, during which the Turkish side undertook to propose a date for exploratory contacts, its unreliability is demonstrated again as well as the fact that Turkey sincerely does not want dialogue. It insists on aggressive and illegal tactics of past centuries, clearly confirming its role as the pre-eminent factor of instability and delinquency in the region. From Libya to the Aegean and Cyprus, Syria, Iraq, and now Nagorno-Karabakh.

He systematically ignores International Law, International Maritime Law and the rules of good neighborliness. It energizes any attempt at dialogue, ignoring the urgings of the International Community. It is provocatively indifferent to the European Union's urges to comply with international law, as a self-evident condition of every step forward in Euro-Turkish relations.

We call on Turkey to immediately reverse its decision.

To immediately end its illegal actions through which it systematically undermines peace and security in the region.

Greece, as a modern European state, is not blackmailed. It will continue to defend its sovereignty and sovereign rights, while contributing to the consolidation of regional security and stability.