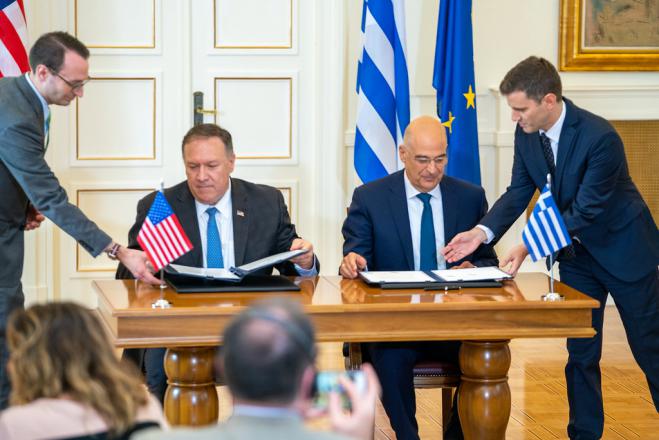 US Secretary of State Mike Pompeo on Monday sent a letter to Foreign Minister Nikos Dendias, expressing US support for Greek positions and condemning Turkish actions.

The US Secretary of State, just a few days after Dendias' letter, which described the latest illegal and provocative actions of Turkey in detail, responded by emphasising that "Greece is a pillar of stability in the region" and reiterating the excellent level of bilateral relations between Greece and the US, according to diplomatic sources.

In the letter, Pompeo underlined that the US "disapproves" of the ongoing Turkish surveys for hydrocarbons in areas where Greece has potential jurisdiction. He added that these unilateral actions only succeed in increasing tensions in the region, and stressed that threats, intimidation and coercion efforts, as well as military activities, will not resolve tensions in the Eastern Mediterranean.

The US Secretary of State also praised the position of Greece, which, as he notes, wants the settlement of disputes through dialogue and always based on international law, noting that our country continues to take all necessary measures to avoid a hot episode, according to the same sources.

Pompeo concluded that the United States, like Greece, wants stability and prosperity in the Eastern Mediterranean, where cooperation will always be developed based on international law.

The above letter was accepted with great satisfaction at the foreign ministry, as it is another confirmation of Greek positions, diplomatic sources noted. At the same time, it has special importance, taking into account the sender of the letter, but also the fact that Pompeo responded to the letter of his Greek counterpart within a few days.