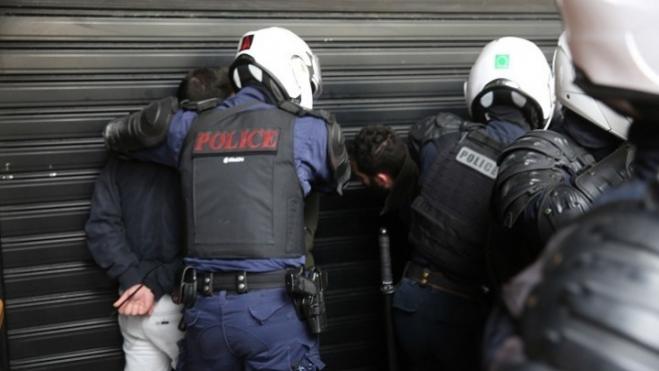 More than 100 people have been detained for questioning at police headquarters for violating a four-day police order (November 15-18) banning rallies during Athens Polytechnic Day commemorations on Tuesday.

Scuffles broke out at Kaisariani Park, where antiestablishment groups ended up after a protest march that started in the neighborhood of Vironas. Meanwhile, tensions were reported at Sepolia, central Athens, between police and parties of the extra-parliamentary Left. Similar incidents were also reported at Larissis train station in Athens on Tuesday.

Seven people who were earlier arrested in central Athens during a Communist Party gathering were released, police added.

A 55-year-old man was hospitalized with symptoms of a heart attack following the arrest of both his son and himself at the Kolonos police station in Athens on Tuesday.

According to the police, his son was arrested after pelting police officers with stones and taken to Kolonos police station for questioning.

Police there ordered his transfer to the Attica police headquarters for reasons of jurisdiction.

While he had left the Kolonos station, his father, his 22-year old sister and two more people offering their support arrived at the same station. Police ordered their arrest after verbal confrontations. While he was being handcuffed, the older man said he felt unwell and he was transported to Evangelismos hospital, where he is under guard.

His daughter and other two people were also taken to police headquarters for questioning.

The event took place in the context of incidents that erupted in central Athens on Polytechnic Day commemorations, when people tried to march against a police order banning public gatherings amid the pandemic.